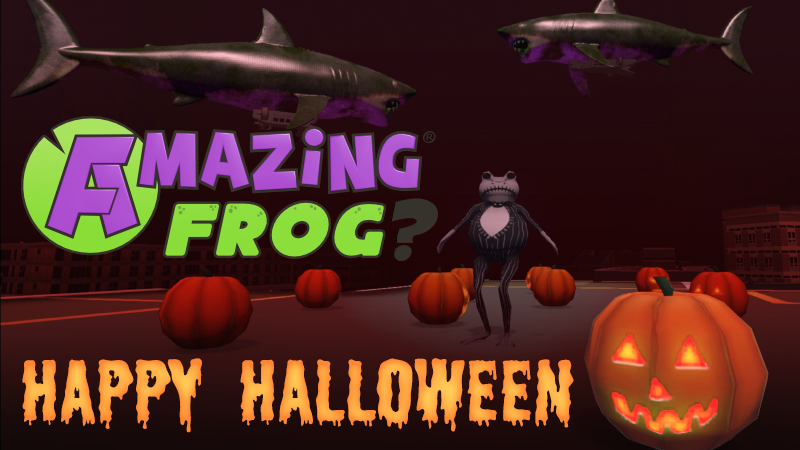 Just in time for Halloween, Blood world has returned to Amazing Frog? ‘Remastered’. So you can get your smashin’ pumpkins on.

Watch out for those flamethrowers! Playing with fire can be very explosive.

We are glad to be getting more of the core legacy features available in ‘Remastered’.

Swindon Citizen Points ( S.C.P. ) and other collectables are now functioning in a newly remastered system. ( Basically saving and collecting things )

The systems behind saving data like S.C.P. needed rebuilding for Remastered (…and my sanity ) As part of this process we reintroduced many achievements along with some new ones. We quite like the t-shirts in remastered and there are quite a few of these added, with more to come. The key to the city has also been remastered. Frog Milk Coffee Co. is still in development. All in all pretty happy with how the new system works and it should be straight forward adding more ‘saveables’ as we continue the remastering process of V2.
Note: as far as S.C.P. goes… sorry I could not bring the S.C.P. from your legacy save file like did for the costumes and accessories, but at least now we can add more S.C.P. goals.

Check out the Spawn Point App, It allows you to fast travel to lots of locations including separate worlds that you have visited. Either enter a Spawn point Toilet to unlock a Spawn Point entry or visit a new world
For example after you visit blood world you can then access blood world from the spawn point app. Its also handy in the sewer for completing the microscope tasks 😉

Revisited the the Sewer and Lab

We made another pass on the Sewer and The Lab. If you did complete the microscopes on the last update, well done… we certainly couldn’t!

it should be fixed and tweaked now so you can grab the launch codes.

Also we put a ladder in the sewer to help with key card retrieval. So getting those launch codes and then fuelling the Space rocket should now be achievable.. You should also be able to visit the Moon. But its in development! and while you can’t go outside yet, you can still have fun with the new lasers !

I never formally introduced Party Mode, this is because in the last update in June I didn’t find the time to write words to go with the update.
Party Mode is currently running as a split screen death match. We had been wanting to add this mode for some time to V2. It will evolve as we develop the rest of remastered. For now I will just remark that it is there, and that when we add some larger features and play modes I will make more of a big deal about it 🙂 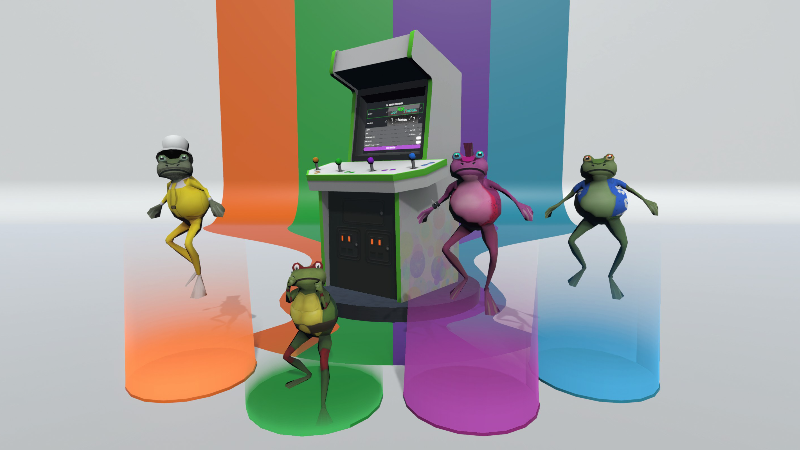 Should be a lot of fixes..
Honestly we have lost track, we don’t tend to list each fix we make we just move on to the next one and keep going often finding ourselves back at the problem we fixed a month ago.

Also, Remastered has a lot of new features that legacy didn’t. Like choosing your frog. While playing in single or 4 player at any point you can choose your frog and start playing as one of the other avatars. There are also many types of objects that just don’t exist in legacy like BMXs, mopeds, biplanes (with guns) or temporary balloon cannisters and flaming hot grills on the bbq.

NOTE: (if you don’t know the difference between ‘Legacy’ and ‘Remastered’ – in short Legacy was build over several years with older architecture and to continue developing Legacy we have to rebuild from the ground up. This rebuilt version is called ‘Remastered’ and is being actively developed to supersede Legacy.)

There have been general optimizations throughout all systems. wink.
Also we have been testing on Steam Deck and we found it runs well in proton if you force compatibility. Steam have listed us as ‘Playable’ so that’s progress, but we will endeavour to make it ‘Verified’ soon. (Because Steam Decks Rock)