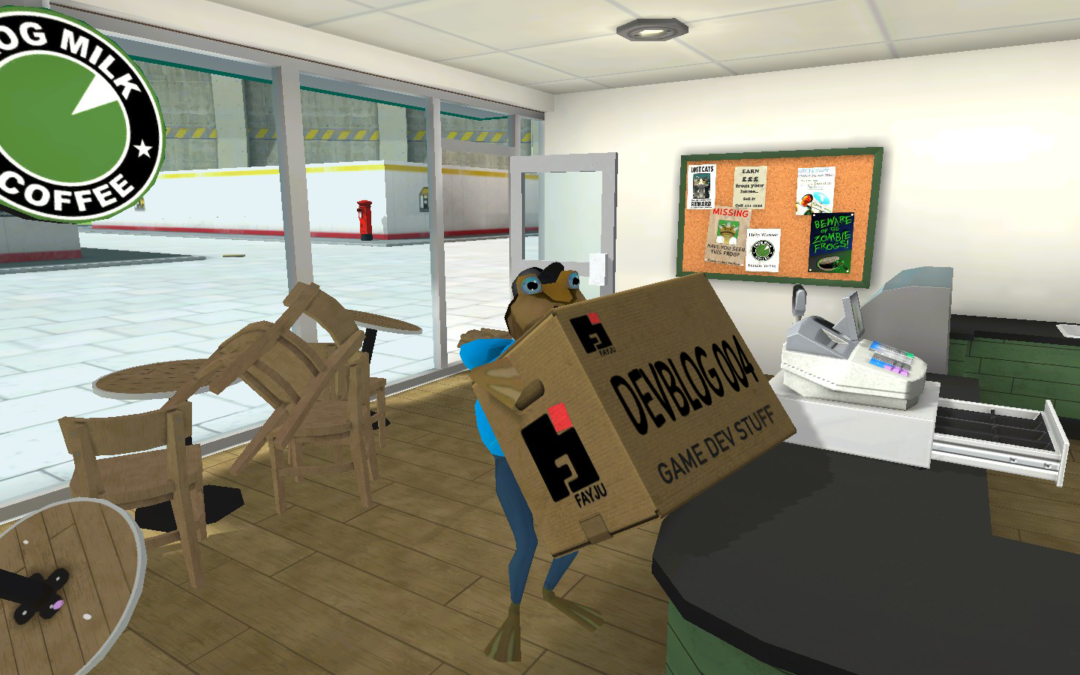 Welcome to Amazing Frog? f0.2.8c – The Frog Milk Coffee Co. Update, Kinda… I’m making a beta available, The official update will come this week.
Sorry its been taking so long, I hope you will find it worth the wait. Its practically done. But there are things that I still need to fix and that may take a few more days. So what I’ve decided to do is make a beta that is not password protected – Its called Preview you can opt into it in ‘Betas’ in game settings on Steam. That way if you cannot wait a few more days for me to resolve the rest of the issues in f0.2.8c, then you can switch to beta and preview it. Also if you experience any craziness or crashes, you can let me know and hopefully I can fix it. Just a note: It will not effect any of your previous save data from older versions, but it will not load any of it in either, so it will start you from the beginning.
you can read this on the Steam Community here

Since the last Devblog (003), the past couple of weeks have pretty much been trying to wrap the update up , so we can get it to you. This is always our priority, but it rarely goes as planned. While we can play around in the editor with new features and experiments,  when it comes to the build process there are so many things that can go wrong. The size of the project also contributes to this problem. Time seems to move at a strange rate during build weeks. I started writing this devBlog yesterday ( Friday )afternoon and actually had a build ready for public beta. Unfortunately a couple of hours into play testing Swindon, I realized that some important features were not working, like buying coffee and so had to fix and rebuild. Its now 8 am on Saturday morning and I am reuploading another build. (I will have to test it on the three platforms first so fingers crossed)

Preparing builds for release from our current setup in Unity 4 can be a long process, one that I know can be improved. Happily, I can say we are about to upgrade our kit which should help there also we know from making builds in Unity 5 that the process can be more reliable. 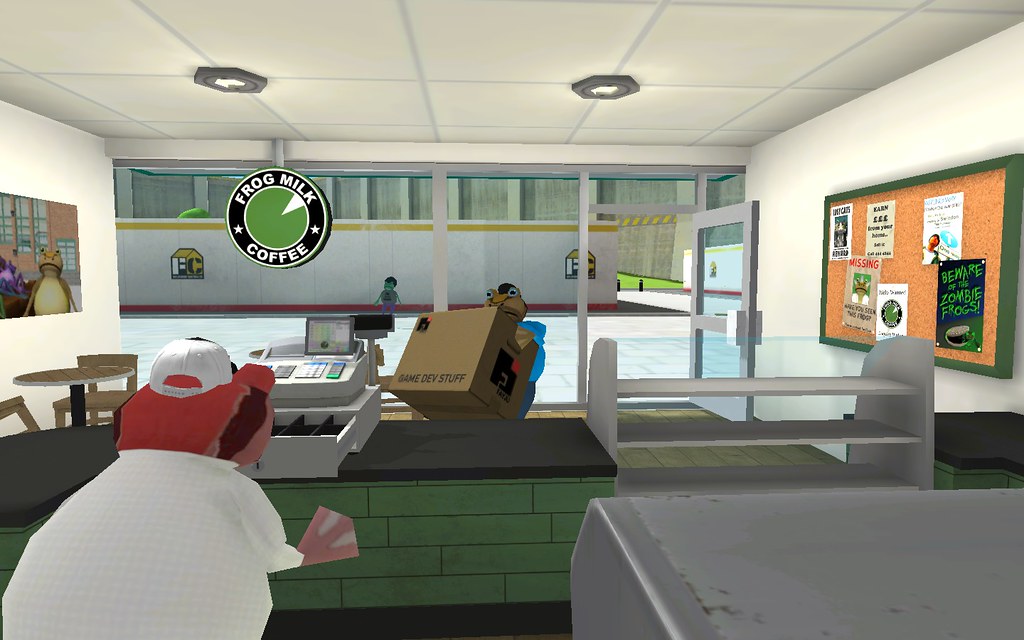 There is so much code in Amazing Frog? its pretty easy to get lost with one small change that can create a butterfly effect which ripples through the whole system. Often I am confronted with a mess left by my past self and immediately i become frustrated and angry with his lack of planning, only to realise that this “previous version of myself” had, in fact, put safeguards and structures in place to help the presently, frustrated future version of me deal with that mess.

Its like walking around a vast mansion and you walk into some rooms and think I don’t remember this one… but some one left me a present here… oh its from me, how nice.

With so many details to focus on we have too keep reminding ourselves what the bigger plan is, frogopolis, frog park , swindon on sea, the moon, online etc etc . Detail is often our downfall in Amazing Frog? We know we should spend more time checking our spelling and there are many textures that need upgrading. But we knew this when we decided not to go for small and refined and headed out into vast and unpredictable. 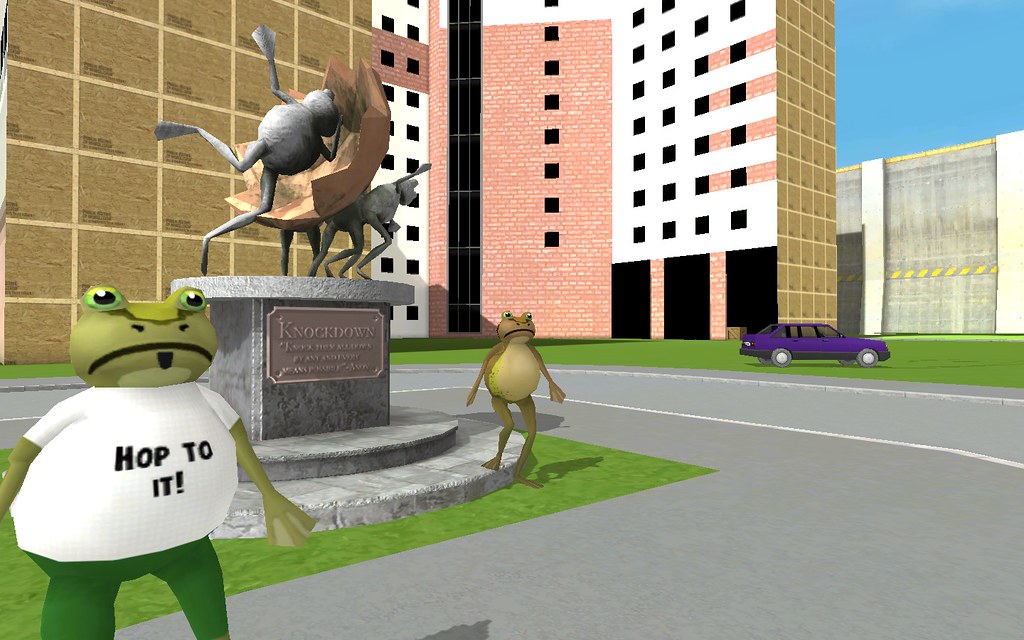 I won’t go into so much detail about f0.2.8c I will leave that to the official announcement this week. But I am excited about pocket mode, so I shall try to explain why. One of my biggest regrets and oddly the best things we have done for Amazing Frog? was to create SwindonShire. When we made the decision to go with 20km island from version f0.0.1 as the foundation of the world, we were deeply conflicted. We were worried that if we create such a large expanse it will take a long time to populate and having such a large area to render will take its toll on the other processes that are really important to AF? like the physics demand. We just couldn’t resist it. Even now we find ourselves getting lost in SwindonShire. The potential of the landscape convinced us it was the way to go. As with most “executive decisions” on Amazing Frog? we went with our instincts and carried on moving forward regardless of how foolish our optimism may have been. Having a huge island surrounded by water did take its toll on how SwindonShire can run. FPS would drop on slower machines, split screen 4 player would only really work on faster machines and things like the population density slider when put to 100 would just cripple things. Not any more. The great thing about pocket mode, a final thing I can thank my old crappy Laptop for before I upgrade, is that 4 player split screen in Swindon is now much easier on slower machines, population density doesn’t have to be set to 0% on slower machines and can easily run on medium machines at 100% which will certainly help your scores in Knockdown. It opens up more gameplay in Swindon not just for slower machines but also provides more options for faster ones too. 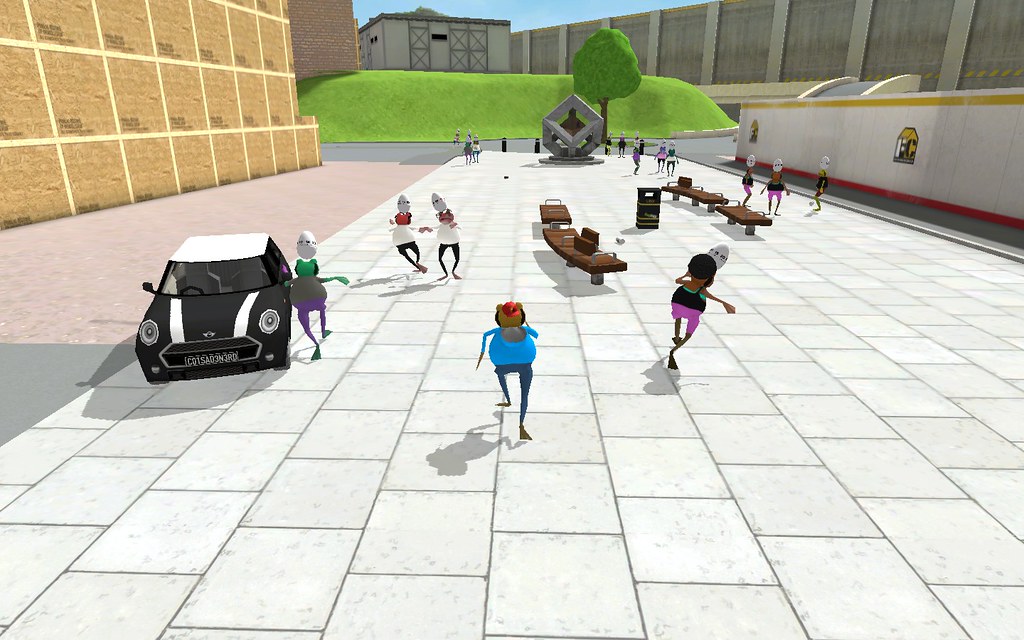 I will come back soon with the official announcement for f0.2.8c The Frog Milk Coffee Co. Update. This is set to be the  final Unity 4 version,  which is a huge mile stone and I can’t wait to abandon the shackles of Unity 4 and its memory issues. We just wanted it to be right, before we start hitting your guys with the exciting Unity 5 stuff. So again sorry its taking so long. I’ll start a thread about the beta and that way you can post problems about it directly there