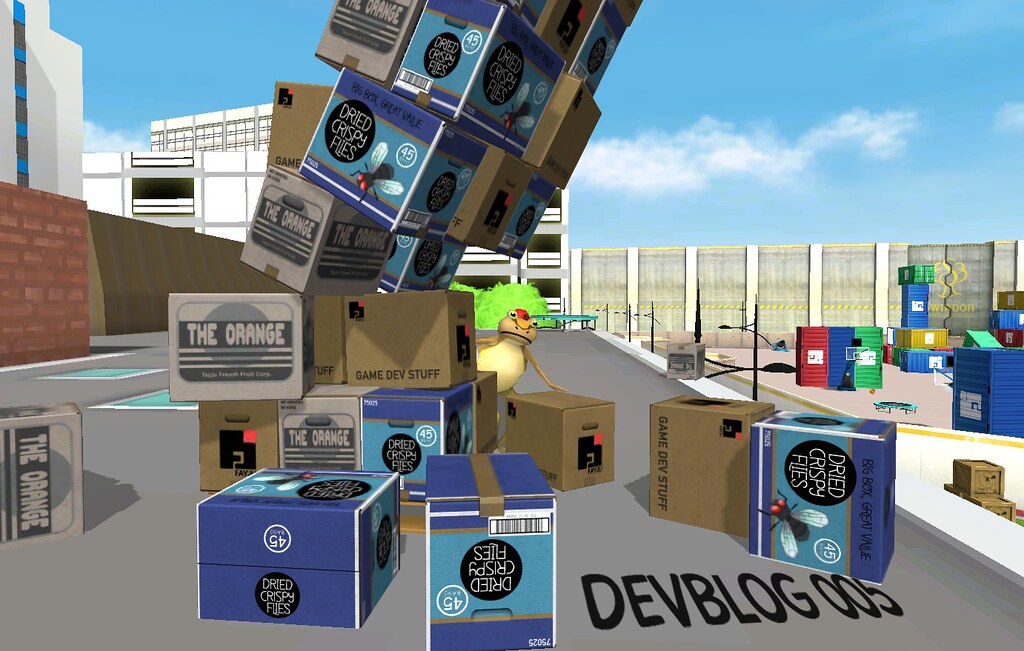 You can read this on the Amazing Frog? Community Page on Steam Here
The Coffee in the The Frog Milk Coffee Co Shop kind of lost its kick in the beta because the rewards points were not working correctly.

If I am honest I knew the beta had a LOT of issues, but I just kind of figured that people wanted hands on stuff and considering we will be starting Unity 5 betas soon I thought why not just provide the option to try out a beta build.  While some of the issues, like the rewards, I’ve sorted the code, things like the effect of “getting jacked up on premium grade frog coffee” were not really fully complete any way so you didn’t miss much. But i am working on that right now too… well now I am writing a devblog, but you know what I mean.

I really wanted to say thanks for the response to the beta, its been really helpful, I’m so glad we did it. We were not actually expecting many people to play it, but its great that you did. As the game grows its becoming increasingly difficult to keep track of all the changes and bugs between the two of us. Sometimes even one wrong line of code can cause multiple bugs that may seem unconnected, like when the keycard and the Key to the city did not work without restarting the scene… one line :/

This past week has been pretty much fixing all the problems you found and of course fixing some we already knew about. Most have been fixed, so expect the beta to be updated pretty soon, dependant on the following stuff in the Devblog.

First up, I’ve been wrestling with a single coffee cup for the past few days. Reprogramming the way small objects are carried and/or interacted with. 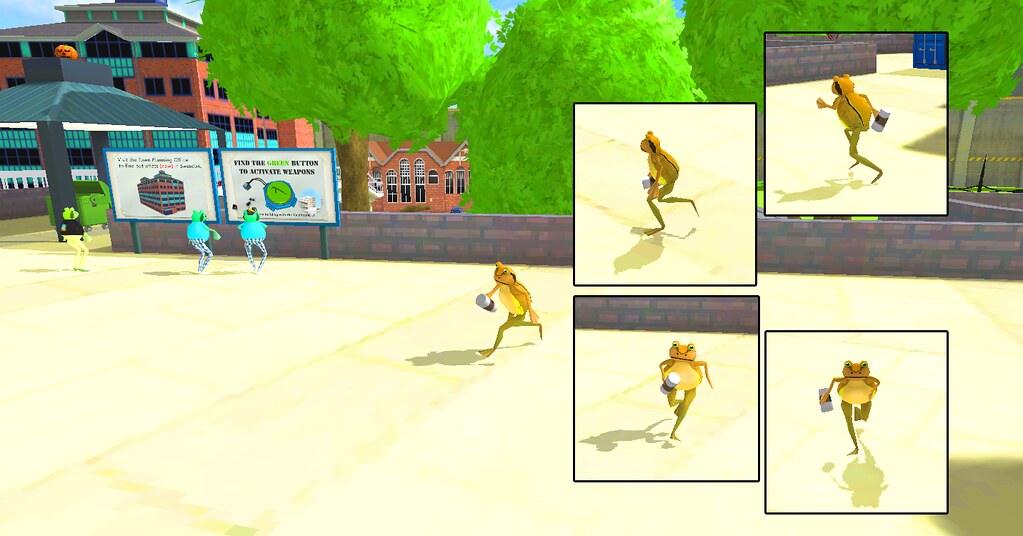 So I think I have mentioned before how attempting to solve one little issue can lead me to create bigger problems for my self, like a butterfly effect… holding coffee is one of those. Currently, when you walk around with a coffee cup, a can of croak, a toilet roll or anything small that you pick up from the floor, it is held infront of you… as one might carry, I dunno,  a full cup of coffee :). I wouldn’t expect items like this to be carried in this way, if a cup was empty, you could run around with it like in the images above. There are a lot of items I would expect you to run around with as the image above including the smaller guns( when you are not aiming). It sounds really trivial, but how objects are carried is at the heart of a vast set of interaction mechanisms that drive a lot of the stupidity behind Amazing Frog?

Each object should be capable of “individual purpose”, but they should all be driven by a unified set of principles and systems. This would empower Hal and I to make a huge variety of stuff to mess about with quickly that all does different things. Something as simple as the difference between how you hold a coffee cup when either full or empty has forced me to re visit some old work that we had done to drive melee in some of our pre release test versions. I am not saying that you will be able to swing a baseball bat or sword in the next beta…But think of it like this – when you pick up a full cup of coffee and holding it upright and then hit “shoot” and drink the coffee by raising the cup to your mouth providing your frog with some sort of consumable powerup, it is done very much the same way as one might pick up a sword and perhaps press attack and expect it to swing in front of you.

in short, I have been modifying the way a frog holds coffee cups so i can get us one step closer to swinging baseball bats and throwing grenades.

FrogLife™ NPCS were created to phase out the old style NPCs that were basically the same objects as the player frogs… but with slight modifications. These were the original NPCs in Amazing Frog?  It felt like the right thing to do (to have characters that were the same object as the player frogs )  but it wasn’t. It may come in handy for something else like more focused bots, but for the general populous, that process wasn’t optimised enough. They carried too much “baggage” from the player frogs. We always wanted more frogs. When asked should there be more frogs in Swindon our answer is always … yes. This is why the FrogLife™ system was created. Its not perfect, but it is way more optimised. 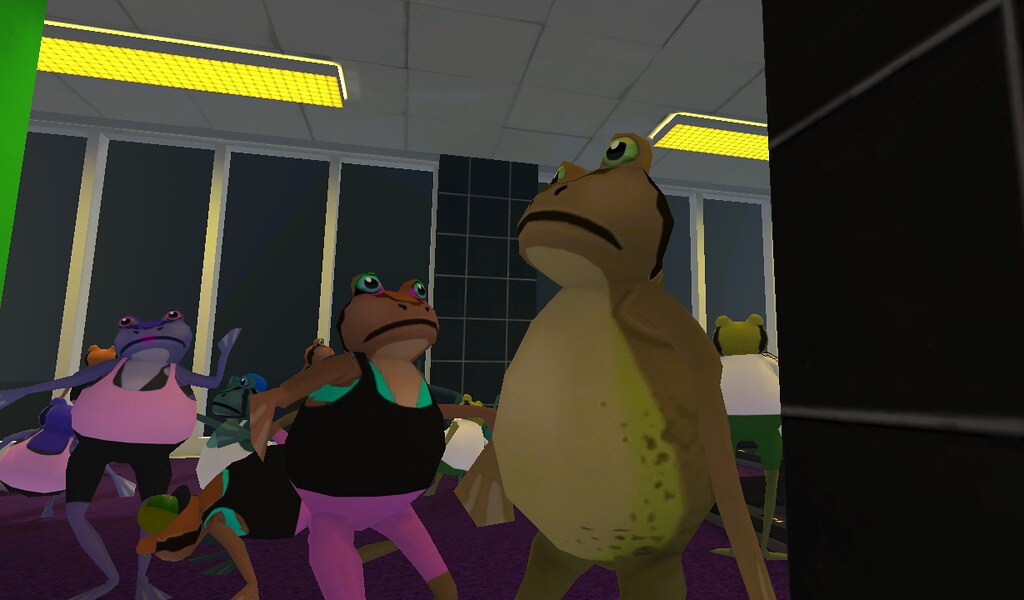 The last place where FrogLife™ was not in effect was in Fart Gyms, so one thing we did do this week was update the gym frogs there. While there are certain things that are currently not possible with FrogLife™ NPCs like riding them, there is more that is possible and each update the system is growing. We try to refine elements of the FrogLife™ system as often as possible, such as how frogs react to explosions and gun activity or what attracts their interests . Also each of the emerging personalities are gaining attribute governing their reaction, like the police, crims, gym Frogs, business, king, ants and zombies. I knew they they were not reacting properly in the beta so we have spent some time tweaking and improving this.

Your old data from f0.2.8b still exists, so don’t worry. It is completely separate to the data saved in f0.2.8c with the new save system and updated fOS. If for example you sign out of the beta and default back to f0.2.8b it should continue as normal. 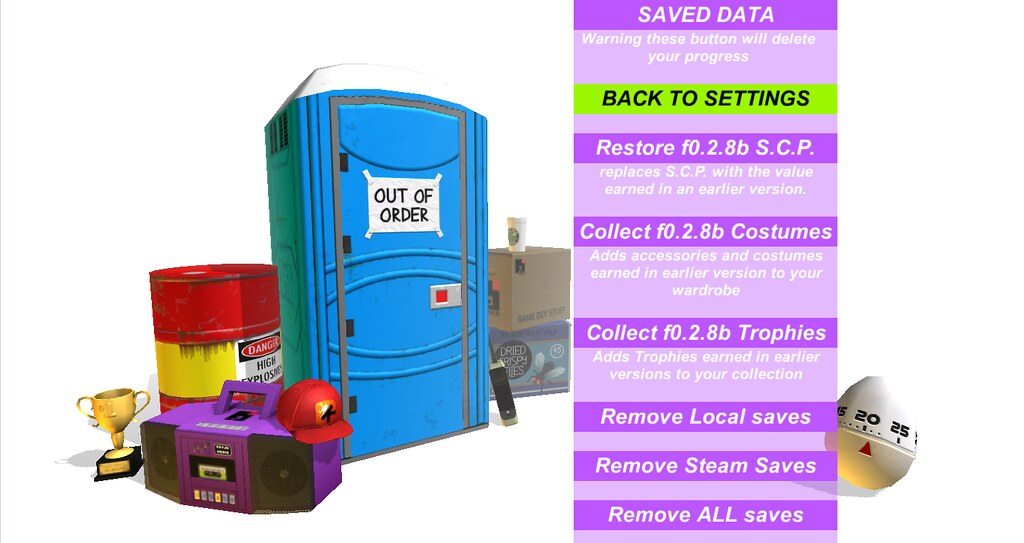 As I had said in a previous post, I did not want to try and run an automated process that converts your old data as it would be a bit risky. In the end I went for quite a simple process of collecting specific data from your versions lower than the beta. So for example if you got half way through collecting the cats you can “Collect f0.2.8b Trophies” and add what you collected before to what you may have collected since you started in the beta. SCP on the other hand is set as a restore. e.g., if you had 500 SCP in the early version and since being in the beta you had collected 600, you probably won’t want to hit the restore button.

Its really difficult to keep up to date with whats going on in the discussion when i’m so wrapped up in development. I’m doing my best, but I have to thank a lot of you that help players out with their questions. A lot of the time providing better answers than I do :).

Its been pointed out to me from various sources, that I might need to make moderators. The fact that I haven’t so far is not that I don’t want to, I just don’t know the ins and outs of it yet and I really want to focus on getting the definitive version of f0.2.8c out as soon as possible.

Its been really exciting to do our first beta and I’m glad we did it. We’ll get an update to that beta as soon and possible and hopefully  that should be pretty much the f0.2.8c update. 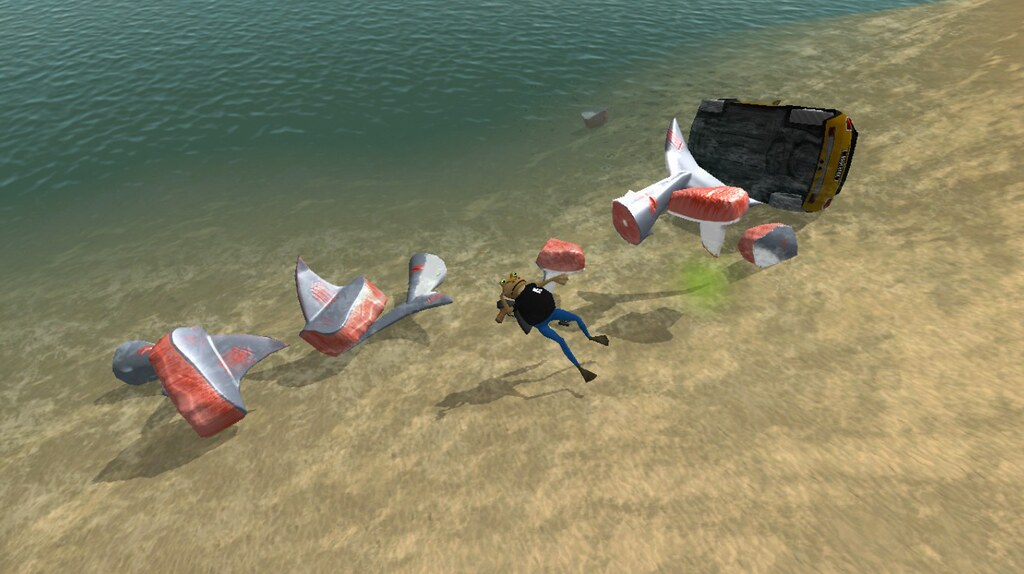 also its odd, I’ve not seen any massive bits of shark sushi yet….