you can read see this post on Steam here

Since we last spoke we’ve been picking up a lot of stuff. I mentioned last time that we were having some issues with how to hold certain items. We had dealt with this in previous versions with the “holster” button. This was more of a workaround rather than an actual solution, mainly due to the “pick up” button and “get in” button being the same. Now getting in or out is prioritized above picking up. This means you can get in and out of cars while holding objects or take an item to other spaces, like fart gyms or the sewer. Also, smaller held objects are more like an extension of the ragdoll so this will result in less craziness**.

**(absolute removal of craziness not guaranteed) 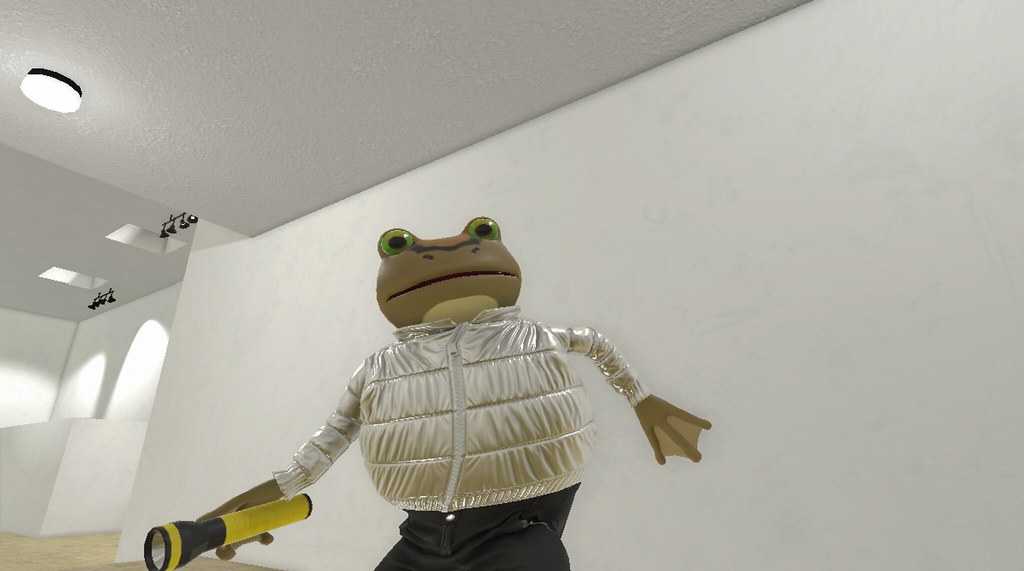 Portable items not just about guns, of course. There is a multitude of new items we are building to use, but what we also discovered is they all need to get fingered. It really came as a shock recently that when you add a level of detail like fingers … things get complicated real fast. It’s great having extra detail and, with hindsight, we should have seen this, but the extra work that comes with that extra detail can become overwhelming. Every portable item on pickup will sit in the hand differently… try it, try picking stuff up in your office, your kitchen, your garden, your toilet… we do. Everything needs to get fingered and standard hand pose stuff doesn’t really cut it for our 3 fingered friend. So a system was needed.

Its not all bad. We tend to rely on IK ( inverse kinematics) for how we carry most objects and have done for some time. I mean we wouldn’t be able to make an animation for how you carry each of the items in the game. It’s not feasible for a small team to make individual carry animations for each object…we’ll leave that to AAA farms. So we use IK to map hand positions to targets or map targets to hand positions. Having hand pose data for fingers enhances this and inevitably opens us up to a new level of froggy expression.

There are quite a few new objects we have been preparing for the new Amazing Frog? some you will not have seen before, but one of my favorites from the new batch has to be the torch. 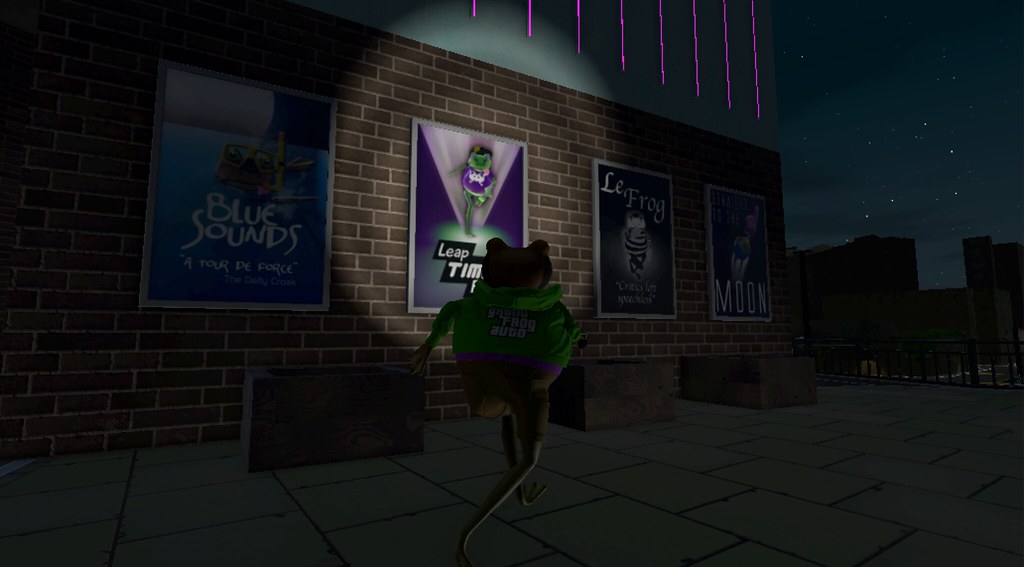 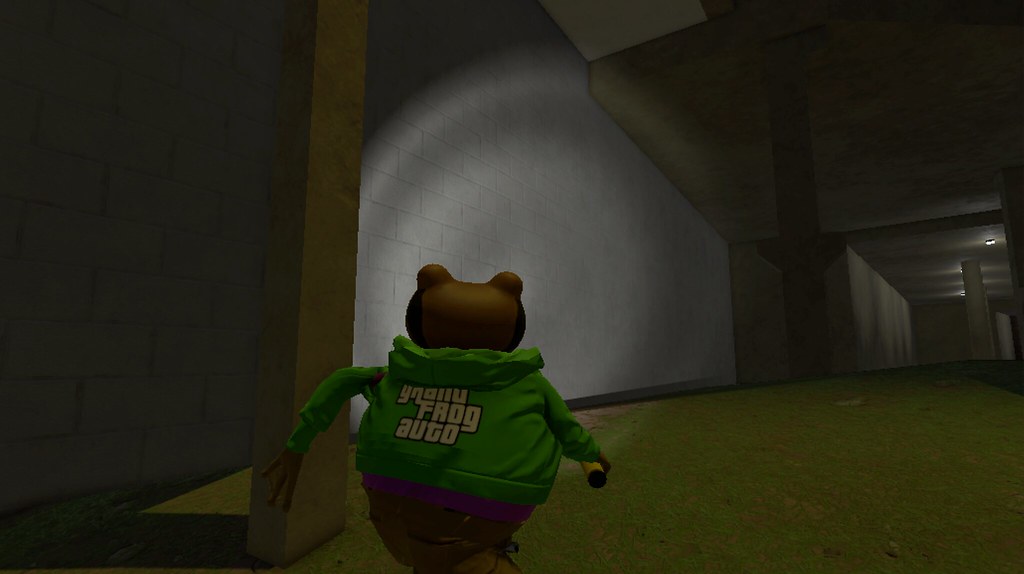 We can certainly see the benefits of the more stable physics system that unity has brought to the software, but for a game like Amazing Frog? fundamental improvements can cause headaches. Capturing the essence of the previous Amazing Frog? without losing the “floppiness” or “floopyness” has been one of the hardest challenges I  have had to face in programming this new version and is an ongoing concern. 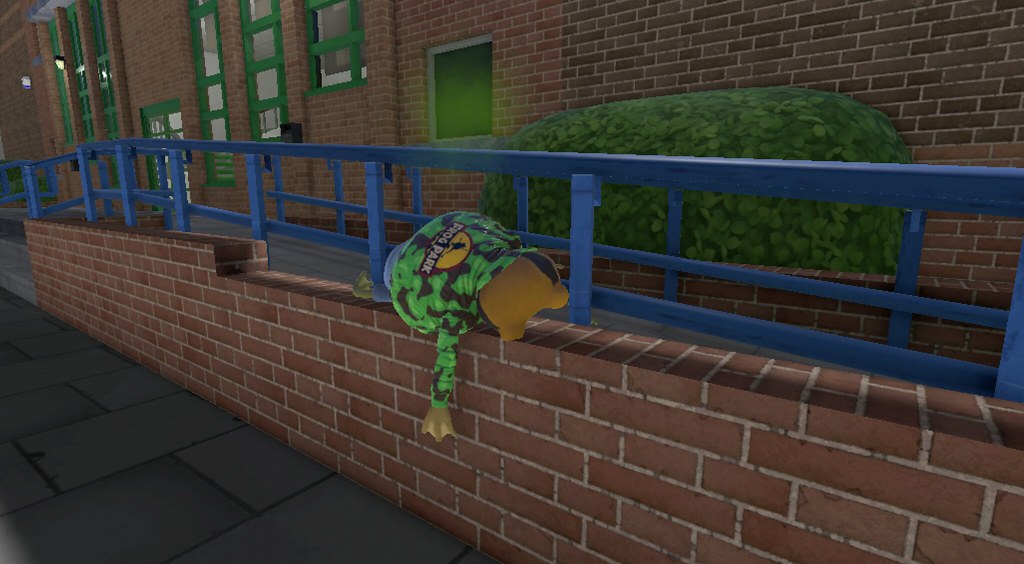 Previously, I would concede that some of the essence of the “character” of Amazing Frog? was derived from the inherent flaws in the underlying physics system. For us, it’s important that movement feels fluid, but also floppy(sorry I can’t think of any other words to describe it at the moment, but I know what mean) Each day we spend a bit more time just fiddling with the ragdoll system. However, as much as the new stability has created headaches it has also brought other exciting opportunities.  We have been experimenting with the idea of holding your pose in flight, tightening your ragdoll for more control while falling its new for the system so we are not sure how to present it yet, but its looking promising.

Certainly one obvious benefit of a more stable underlying physics system is actually being able to “ride” the dumpsters, dumpsters with closable lids in a more determined and predictable, yet chaotic manner. 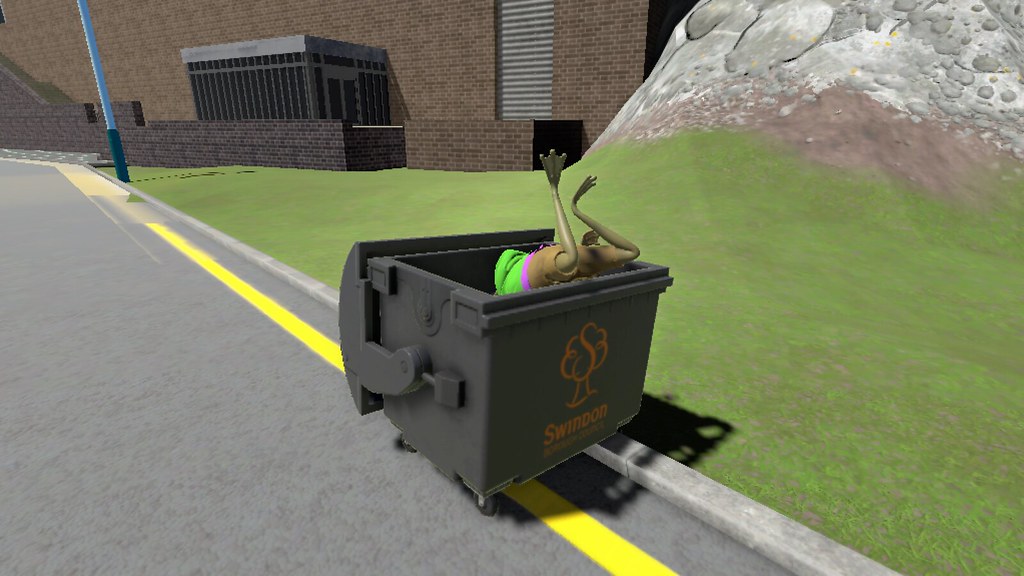 Accidents do still happen of course. 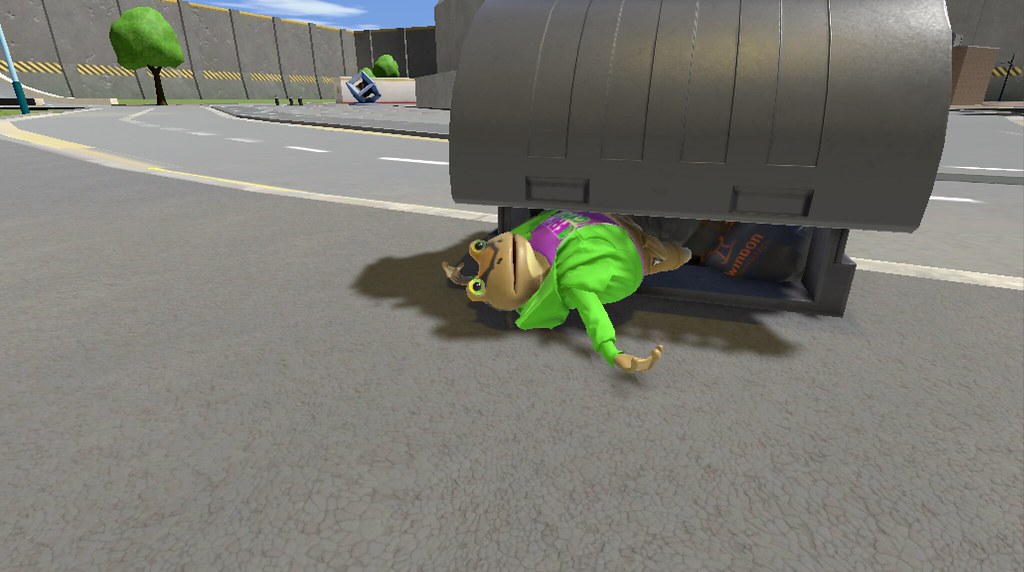 Does everyone call them dumpsters? we sometimes call them wheelie bins… but you get my point.

When we added pigeons to The Swindon Space Program Update earlier this year,  it was something we had been meaning to add to Amazing Frog? for a long time. Hal’s original super low poly pigeon was in fact made for the OUYA version back in 2014, but we couldn’t get a bunch of pigeons flying about on that tiny little cube… in the end, we put a pigeon on a skateboard for a laugh. Either way, wildlife, vermin or rodents were always systems we wanted in and around SwindonShire. As much as the FrogLife, the rubbish or post system, it is another ecosystem to interact with, collect from or just use for target practice. For this new version, we thought we had better get the new bird assets in sooner rather than later. 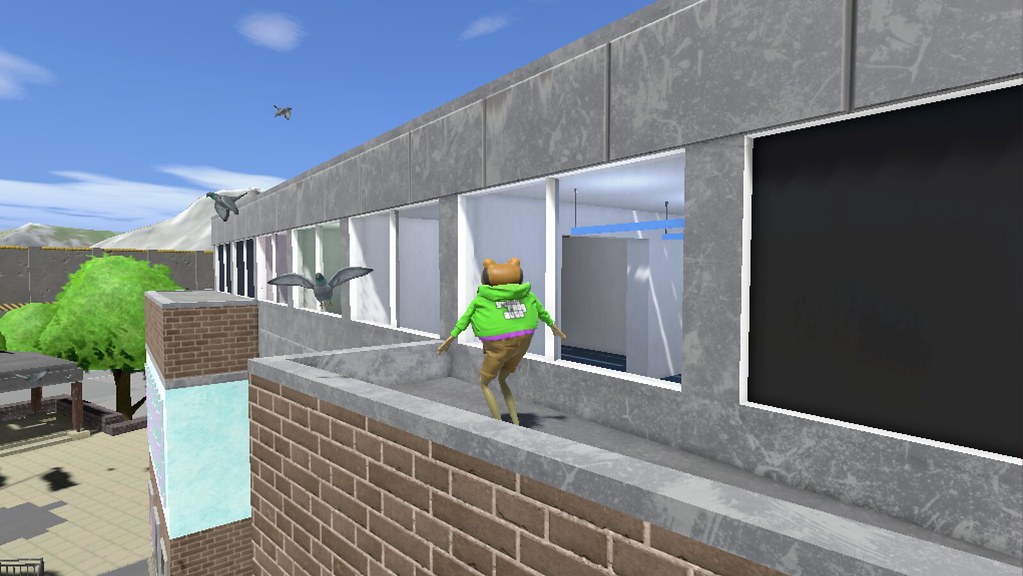 Aside from the new pigeon models Hal also made some seagulls which we have added to vermin life. Of course, we’ll need more. 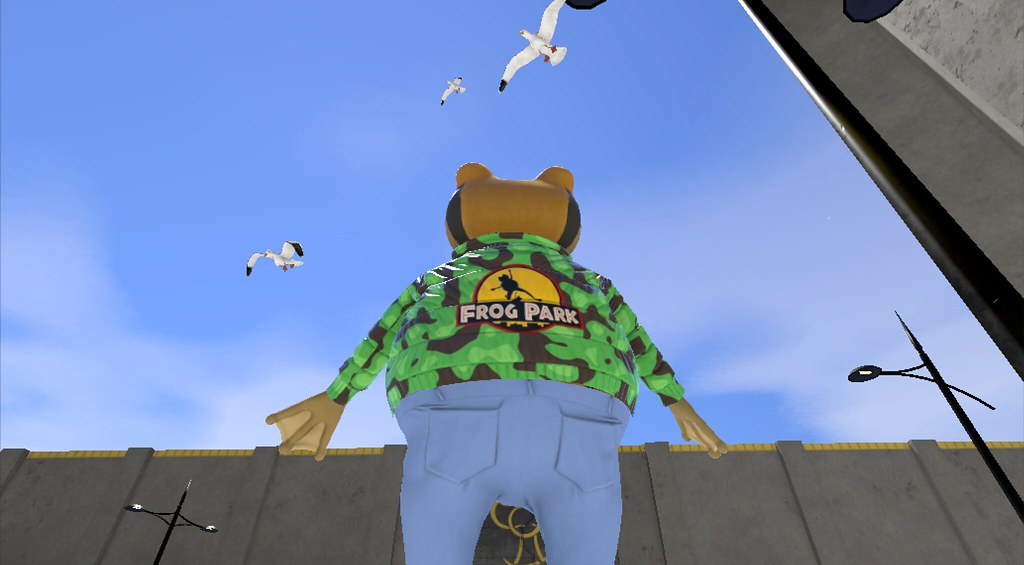 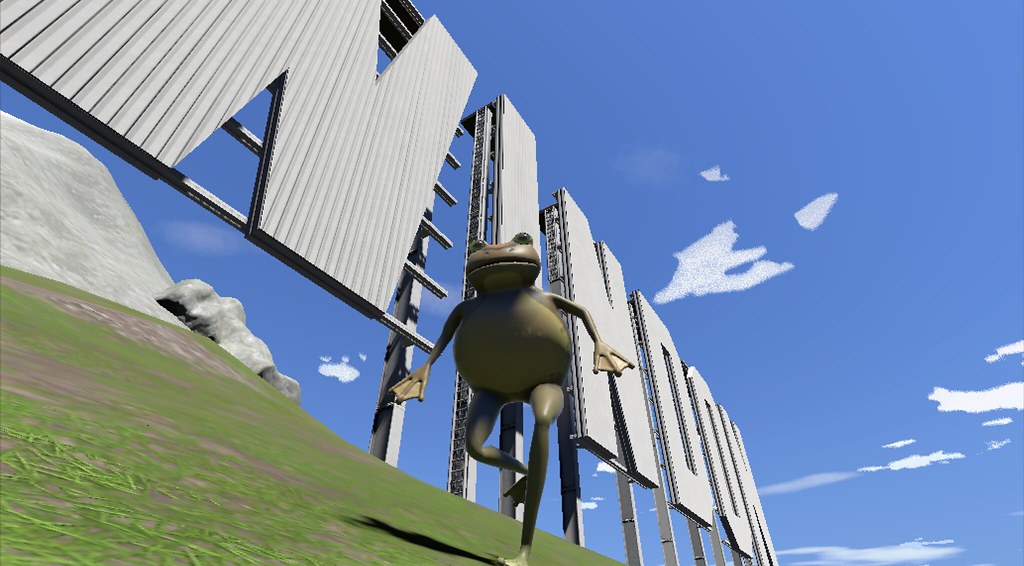 So whats been going on outside of Swindon? The Swindon sign is a major feature in the SwindonShire Landscape (not sure why I visited it naked in this screenshot I tend to take these screenshots in the middle of the night and I guess I just forgot to get dressed). We had always wanted The Sign to feature more as part of the gameplay, but it never really had a level of detail high enough that we wanted to build on… until now. Like the golden pug, building up these architectural assets as more than just points of interest in the landscape is our intention.

3 Years on Steam, Looking Back…

This last week saw our Steam Early Access anniversary. Thanks to everyone who nudged me about that. We released Amazing Frog? on Steam Early Access Nov 2014.  We’re so grateful every day to be doing this. We really love this game I get a kind of emotional fart brewing when I think about ithow far we have come … With that in mind, now might be a good time to have a quick look back over the development of Amazing Frog? which hopefully should explain whats coming next…

The way I see it, is that Amazing Frog? development to this date has had 3 major versions. Describing them as versions should also help when I am writing these blogs

Version 1: The OUYA version (and the never released iPhone and Android versions)

Version 3 actually began development in the middle of last year and is without a doubt our primary concern and what we spend pretty much all of our time doing. Last year, however, there were problems with our approach, we make mistakes and try to learn from them. Originally, we thought we could “port” from version 2 to version 3, but I don’t think even unity was ready for that process. So we decided to make version 2 more complete by adding features we were working on for version 3 such as fire, tethers and the moon and a bunch of other stuff. Following that, since May this year, we have been developing Version 3 exclusively and purging anything that was still left over from version 1. Version 1 graveyard includes things like the multi-story carpark, hideous low res textures, old buildings one poly thick walls. We have been creating completely new assets for just about everything, like the new car system, new weapons, new vehicles, new buildings, new creatures, new landscape and most importantly a new Frog (and frog system) All of which designed visually to work towards better graphics and systematically to work at core with the online multiplayer system.

So, yeah, version 3 is like a rebuild (kind of) or I guess you could call it a full Strip down clean, enhance or replace followed by a reconstruction…rebuild is easier to say. We have no intention of losing anything from Version 2. Version 2, or -“f0.2.9e The Swindon Space Program”, let’s just say we like the game as is, but to progress, we had to bring break a few eggs.

So where am I going with this?

Our intention and indeed goal is to get the first Online Beta available before the end of this year. I need to be realistic about what this means. This would be a stripped down unoptimized build of version 3 with online capability for testing, that players can start messing about with. And into that beta, we will drip feed the new assets. As we move forward we will be spending most of our time housekeeping and fixing version 3 and certainly be spending much more times watching the forums and not in a development crunching cocoon.

Lets face it to properly test multiplayer we need players in the system and considering Fayju is just me and Hal, well lets just say we don’t have enough people in the office. We‘re working really hard to achieve this.

but also… since it almost Xmas…. 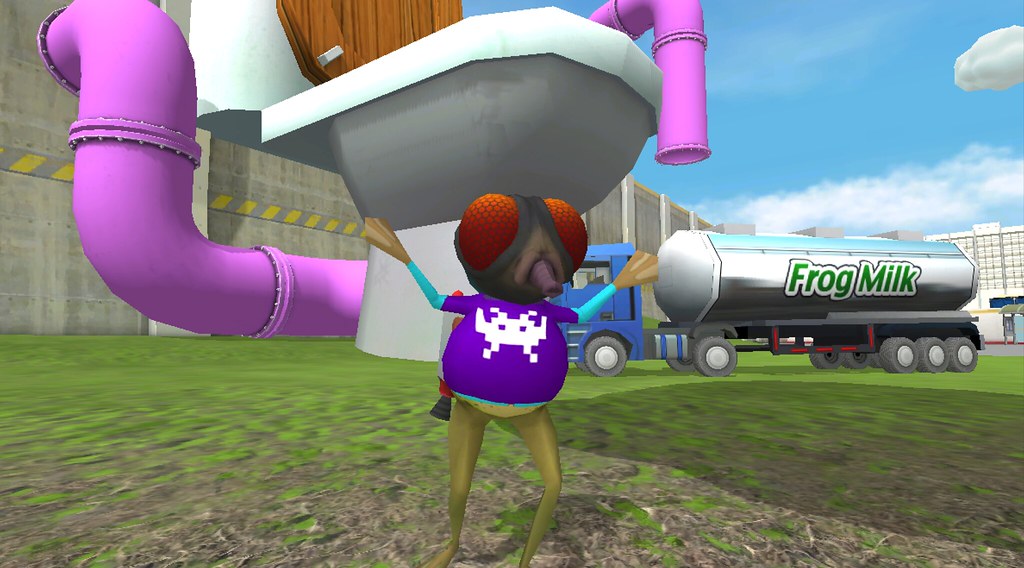 Version 2 still very much exists. Version 2 and 3 will coexist in your Steam library and maybe at some point next year Version 2 could even exist on other platforms, provided nothing gets in the way of version 3!   So in the short term, considering that we are a bit crazy, we figured what the hell? Let’s also do an update to version 2  and call it f0.2.9f  – The Magical Mystery Toilet. Which should be available in December before Xmas. Is it an opportunity for us to loosen up a bit after some rather intense and challenging periods of development and add some more strange shit to Amazing Frog?

Thanks again for following this. I hope we are getting better at explaining whats going on… but for now, back to development and will post again before Xmas.