Firstly I hope you are enjoying Amazing Frog? : The Magical Mystery Toilet. The second set of hotfixes has now been uploaded. We addressed some problems we saw in some videos and of course the community has been really helpful in spotting stuff which has gone wrong.
This devblog can also be read on the Steam Community here

Some of the things the new hotfixes resolved were cars exploding as they get flushed, jumping through withheld objects going a bit weird, no reward on red Megladon…various rewards not triggering. sorry. 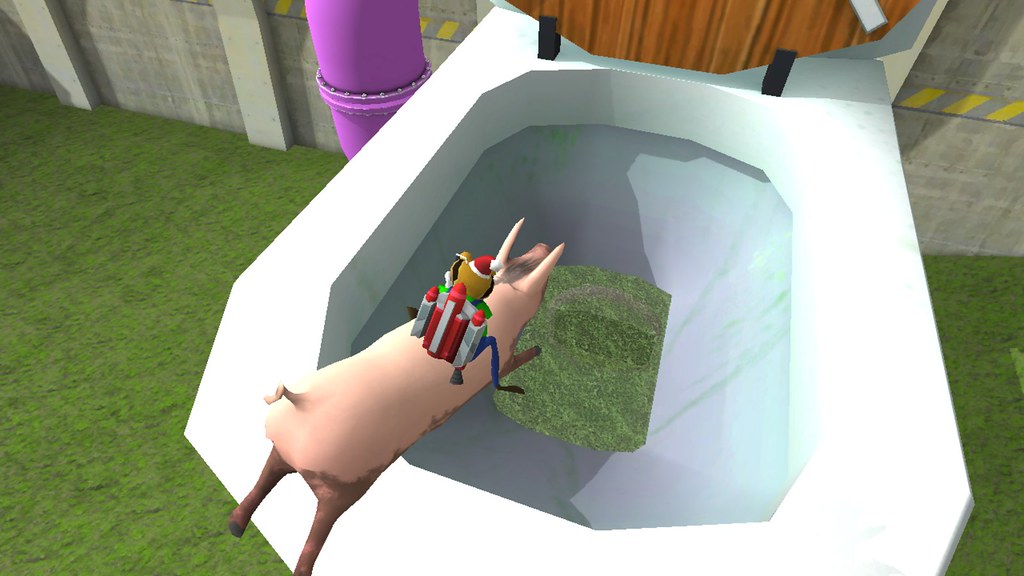 We really do try and test like crazy, but its difficult testing a magical toilet that you can put almost anything in, also we added way more stuff than we had time to control…I mean seriously, we had “shark cannon” on the list…. Either way, we had an awesome time making The Magical Mystery Toilet Update and it just wouldn’t be Xmas for us without a last minute Xmas update. 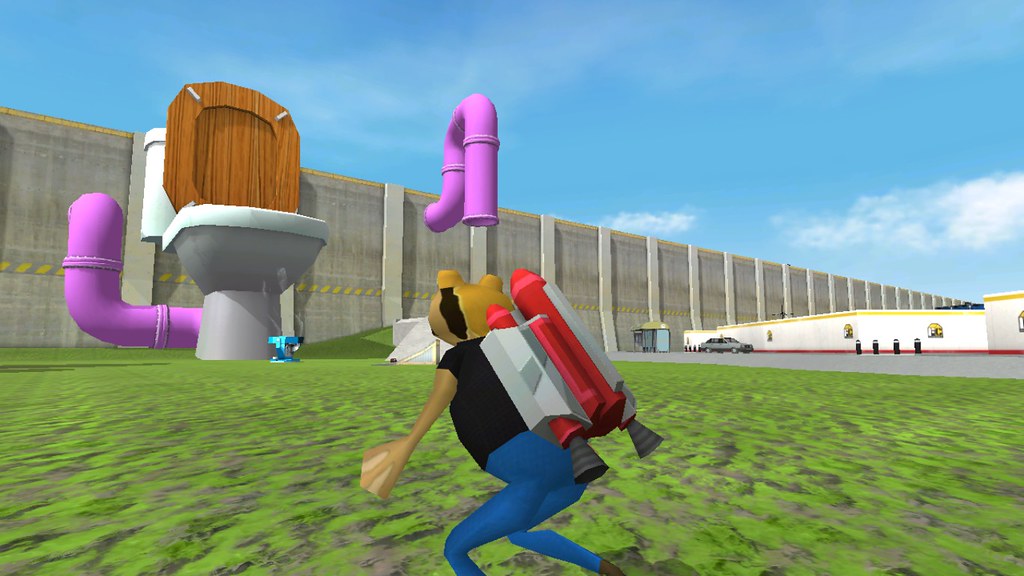 It’s been such a long time since we updated the store page too. not even sure what game I am looking at, we really need to update the store page artwork and trailer… heh and the Splash screen. There are so many great screenshots in the community I think we are just going to have to use some of these on the store page. That is if we can organize ourselves enough to do it… A couple of days ago I went through the screenshots of the f0.2.9a and I ended up downloading over 70 …There were loads more that I liked too! So that’s why all the screenshots in this devblog are yours. The ones I downloaded from the steam community. 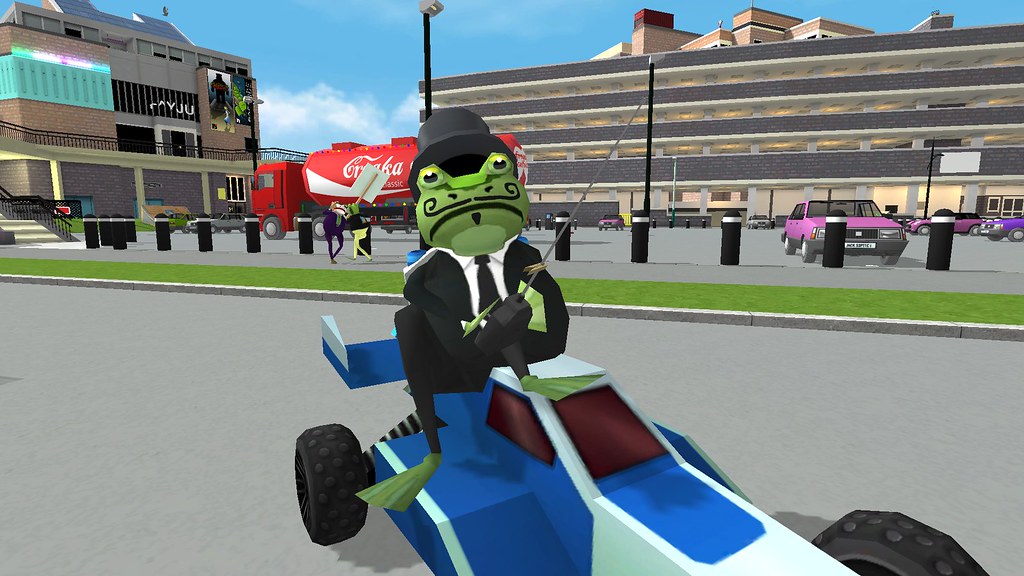 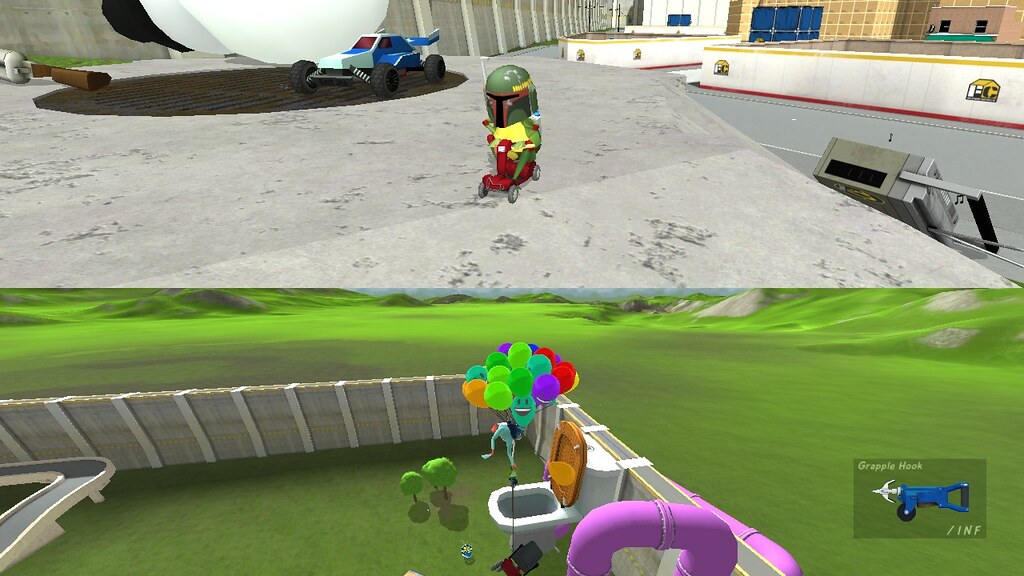 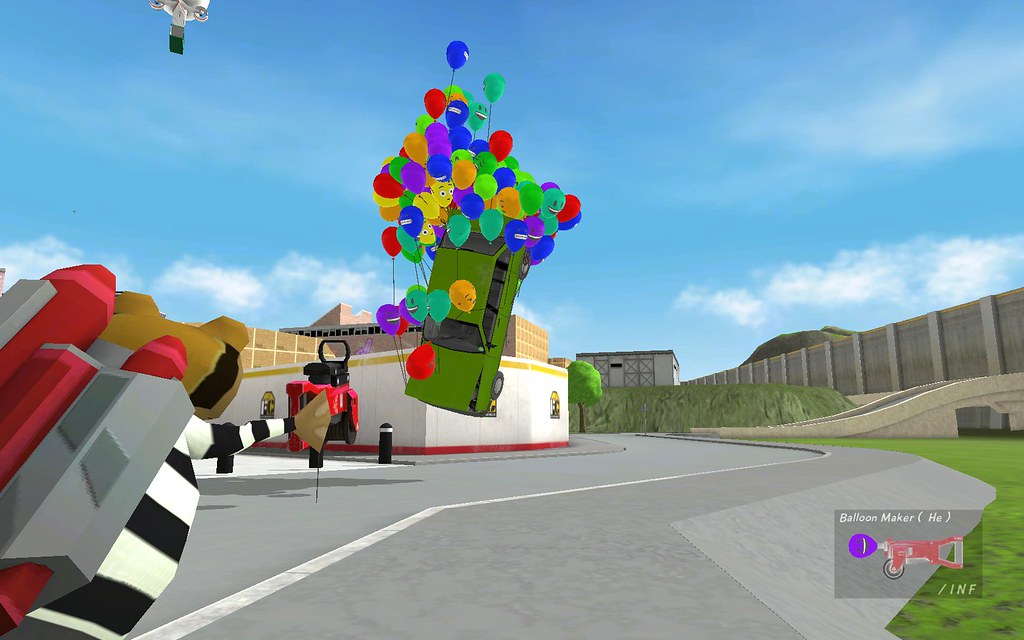 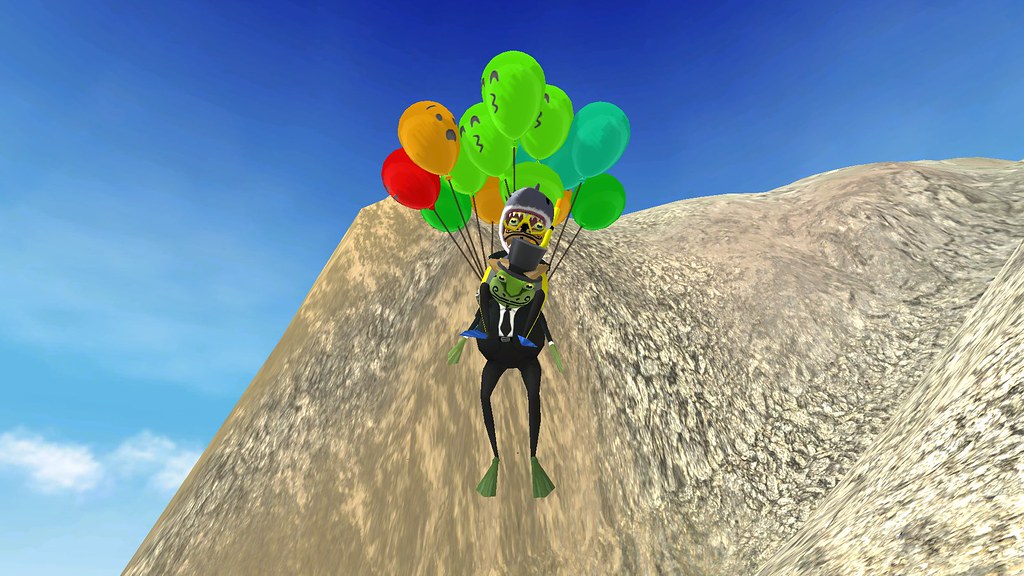 There are so many that are great for all sorts of different reasons. Some show achievement and dedication, some show off the game well, some alert us to bugs and some just make us laugh like crazy. 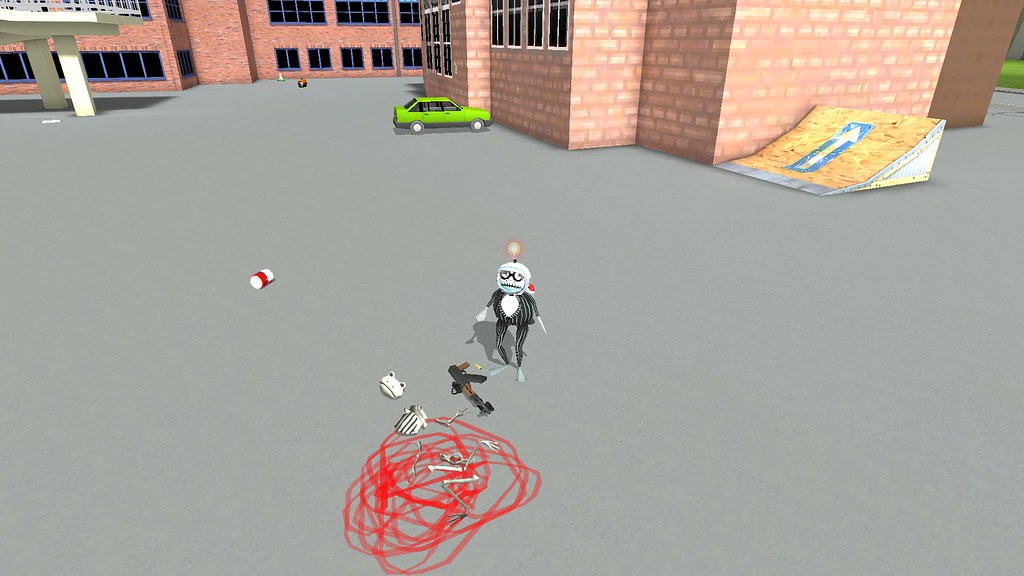 Also, its a great place to see the weird and wonderful things you guys have been getting up to in Amazing Frog? Often there is a lot of activity we hadn’t even thought of. 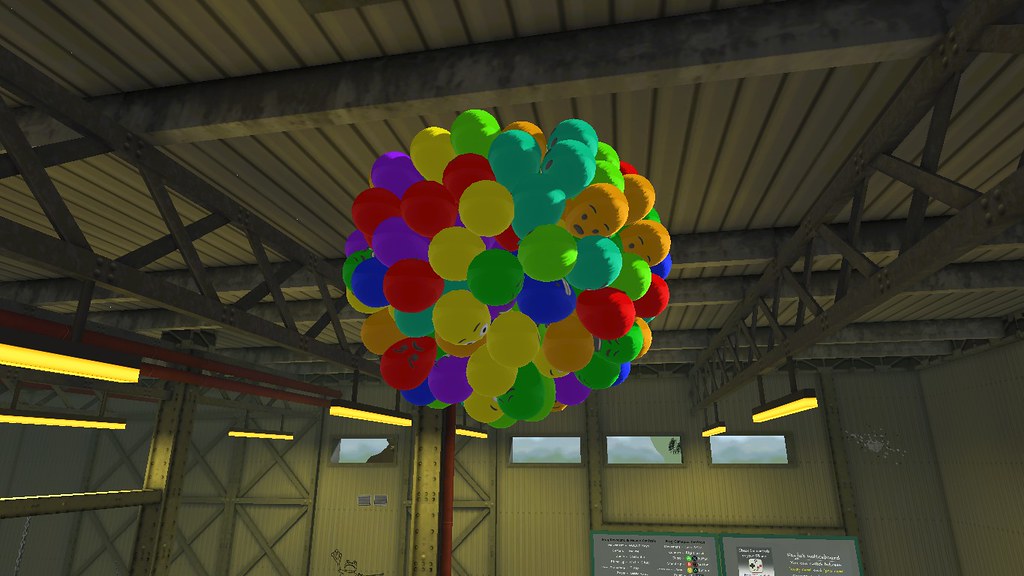 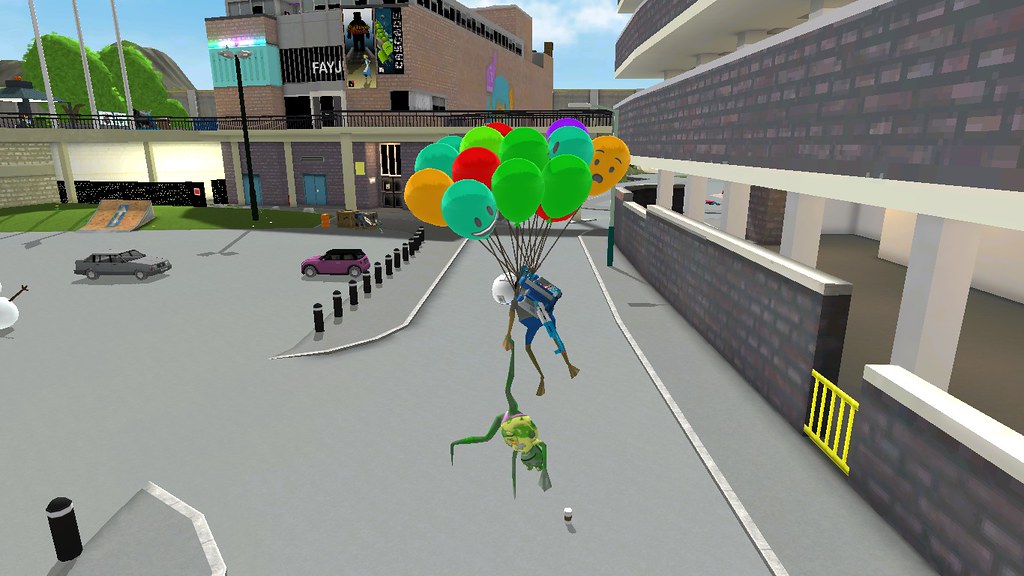 (This is one of my favorites, not just as a cool screenshot, but as I was shocked to see you can pick zombies up by their legs… I mean I must have programmed it to do that, but I had just forgotten. I may have to make it so you can pick up the other NPCs by there feet too.) 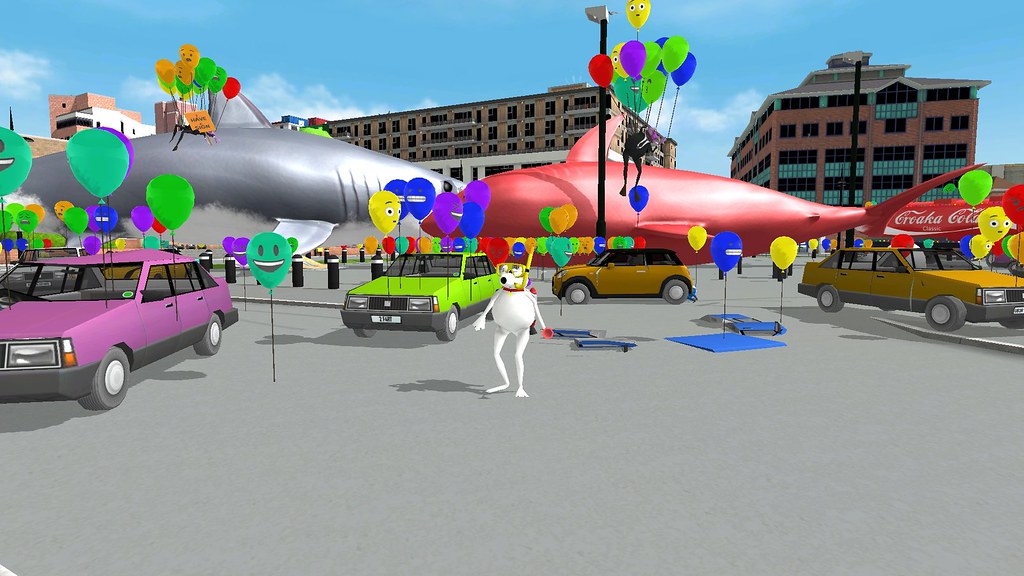 We’ve been making hotfixes, and billboards etc, but we still slowed down a little over the Holidays and these past few days gave us a chance to reflect on the past years development. It was fun being back in V2, in fact, we had a lot more fun than we had anticipated. We had been so wrapped up in the newer looking graphics and more capable physics of V3 that we had almost lost sight of fast-paced nonsense. Developing V3 is a much more careful process, demanding more time and precision, but working in V2 reminded us not to lose our fluidity. For example, if I want balloons I should just get on and build it and not worry so much about if I am going to break everything (I mean it did break a quite a few things, but not everything). V3 is our main focus and will continue to be so as we enter 2018, but there are some items on our V2 Update list that didn’t make it to The Mystery Toilet update and hotfixes and I don’t think we are going to be able to resist the temptation to make them a reality in another V2 update very soon. Even if we just spend a bit of time here and there on V2. Also, since we have built better controls and input in V3 it’s really been bugging me that you can’t click on the menu or phone with a mouse in V2. So I may need to do something about that in the near future as well. 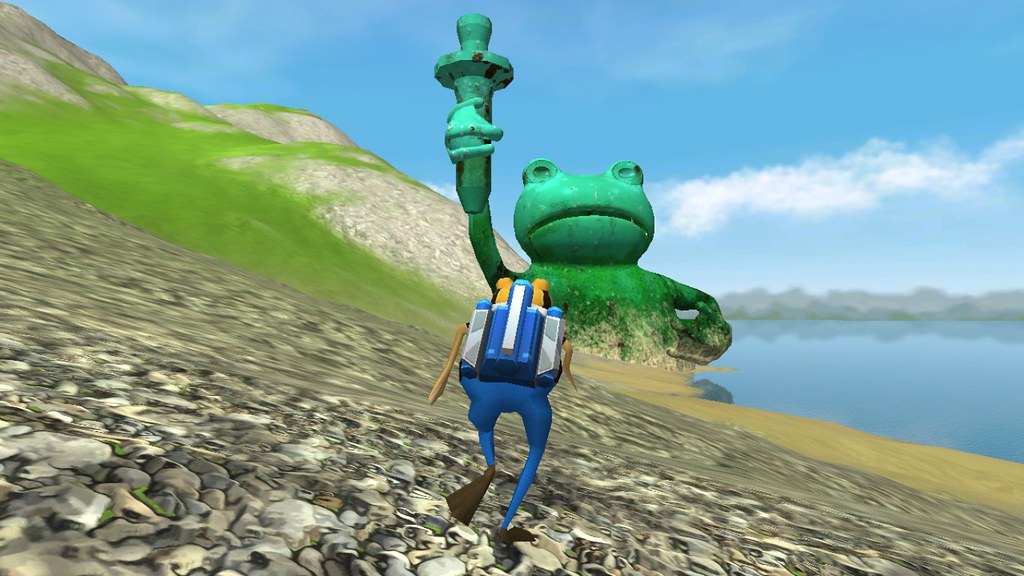 For the most part of 2017, we have been intently focused on the development of V3. We did not venture out of the studio at all in 2017. In 2018 we are planning to get out a bit more, although before we can do that, we have some development targets we need to hit.

The most important first target is to get the V3 online beta playable. We want to have both V2 and V3 playable. So V3 will not replace V2 it will be downloaded with it. Every day we progress V3 feels more and more like a separate game. (A separate game that Steam Early Access players will always get.) As we move forward its likely that the first V3 beta releases will be test modes and we will shut off the main game until we feel its ready.  Much of the progression in V2 was built retrospectively and it’s not very clear that there is a purpose (i use that term loosely) or direction ( another word I use loosely ) Essentially, we felt that we made mistakes as we made in V1 and then subsequently more mistakes in V2 and we want to make sure V3 benefits from our recognition of those mistakes.

Its been a great year, though. We are really excited about what we have made, and what we are working on, but without the release of Amazing Frog? in 2017 as an Online Multiplayer game, it feels like something is missing… 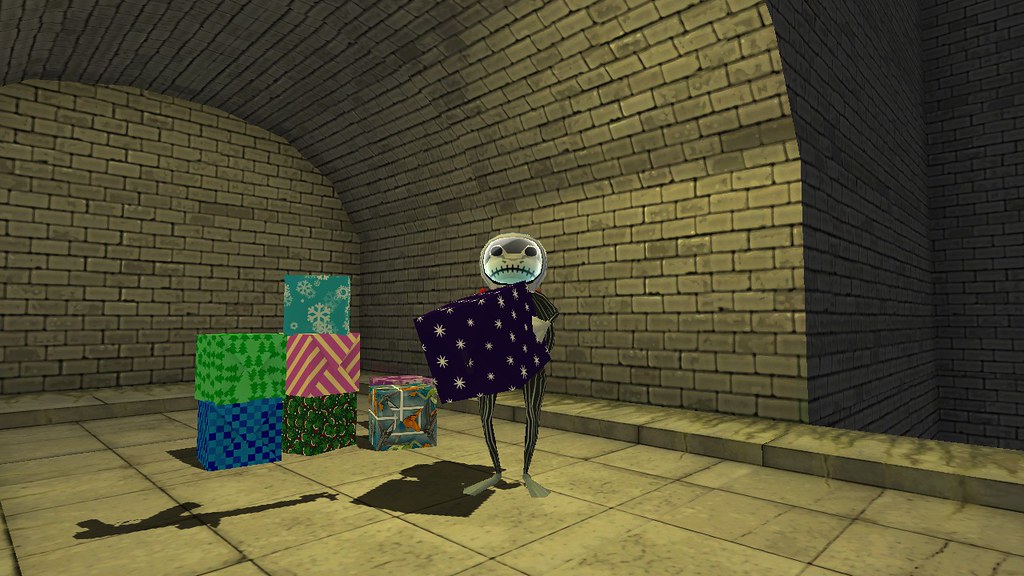 Its close, real close, but it’s not today. We wish everyone a happy new year, Stay tuned for some more updates in Early 2018.