Yup, we spent most of our time in front of our computers developing and we haven’t been anywhere game related since 2016 (Steam Dev Days), in March we went out and met people, we even took business cards. That didn’t change the problem that the development of Amazing Frog? V3 over the past few months has been particularly challenging. So this one is going to be a word heavy devblog…
you can also read this devblog here

We recently went to GDC 2018 (Game Developer Conference in San Francisco), we met a lot of companies and learned a whole bunch of Game Development Stuff. One of the main reasons we went to GDC (other than to feel like real Game Developers) was to discover and explore new technology to support the ongoing development of V3. In particular the two most important aspect of V3, the multiplayer networking side of things and being able to automate and grow a complex landscape, rich with vegetation and er… “stuff”.  We need as much help as we can get. We went to lots of talks at GDC, mainly the “how to make AAA games” talks rather than the” isn’t it great to be an indie” talks (as we got the gist of them in 2016). It was definitely good to get an insight into how some of these massive games are put together, even if we struggled sitting through a one hour talk about how a guy designed a brick wall in Mordor. That one was hard work, not sleeping through that while feeling jet lagged. We got through it and I think I may even have learned something. Most of the speakers we saw all came from big teams, in fact, we met a lot of big teams at GDC and it was interesting to see how they approach things. For us, it’s about how we understand what they are doing and refit it to how we work when it’s just us two.

As an ode to the guy who gave the talk about a brick wall surface for an hour, here is a snapshot of what Hal has been up to today. He has been working on procedural materials. Today it was pebbles. The first pass on his procedural materials for pebbles happened when we started V3 in Unity 5. Technology seems to move on faster than us, so here’s what his new version looks like in comparison to the version we never even released. 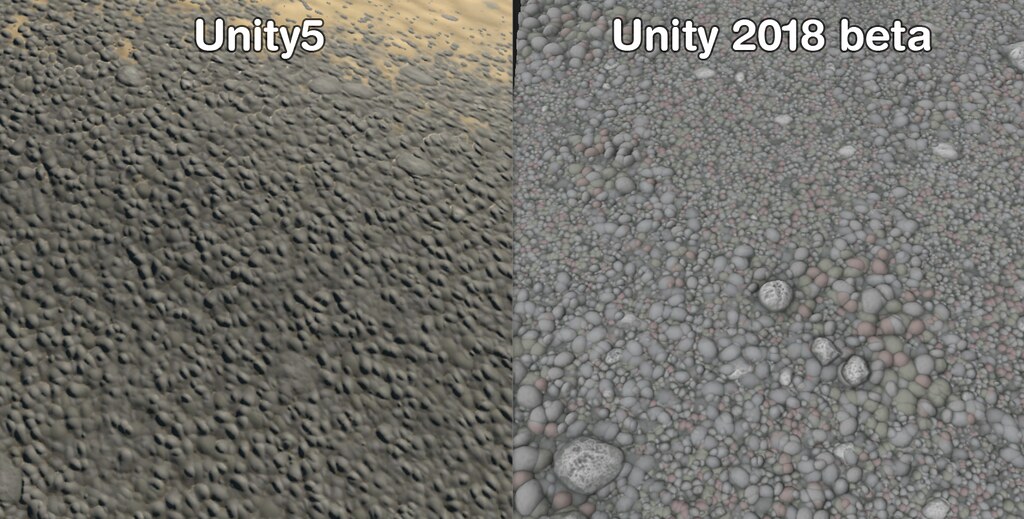 For a reference of the V2 version of pebbles just imagine a greyish smudge. Basically, when it comes to SwindonShire, Hal has been dealing with an impressively large task. His main focus for V3 is now bringing the world of SwindonShire together. To help this process he has also been looking at introducing Hoodini to our pipeline – a very powerful tool for making game development tools, and we can use it with our core toolset of Unity, Maya, and Substance.

I have been playing with a few multiplayer solutions. Most of them I feel are only really needed after the first beta push since the betas will be small test worlds, but when we integrate to Swindonshire as a whole, we are going to need some bigger scale solutions. It was good to meet the people involved so we can move forward a bit and then reconnect when its time to scale up that side of things.

Overall we came away from GDC feeling positive and recharged, but I have to say of all the companies we met, the most disappointing was Unity3d…One of their guys laughed at the fact we were using Unity 4 for V2  Amazing Frog? I explained how we had had to re-develop the entire game over the past couple of years as they had changed so much. A game that had taken us over 3 years to get the feel of the physics “right”. I don’t really know what I was expecting talking them, there really is no point talking to “evangelists” most of them don’t seem to have development experience and I have always found it hard to connect with Salespeople. It felt very much like Unity was more interested in getting new users to subscribe rather than helping existing developers. It was just difficult to deal with since V3 development recently has been very challenging. 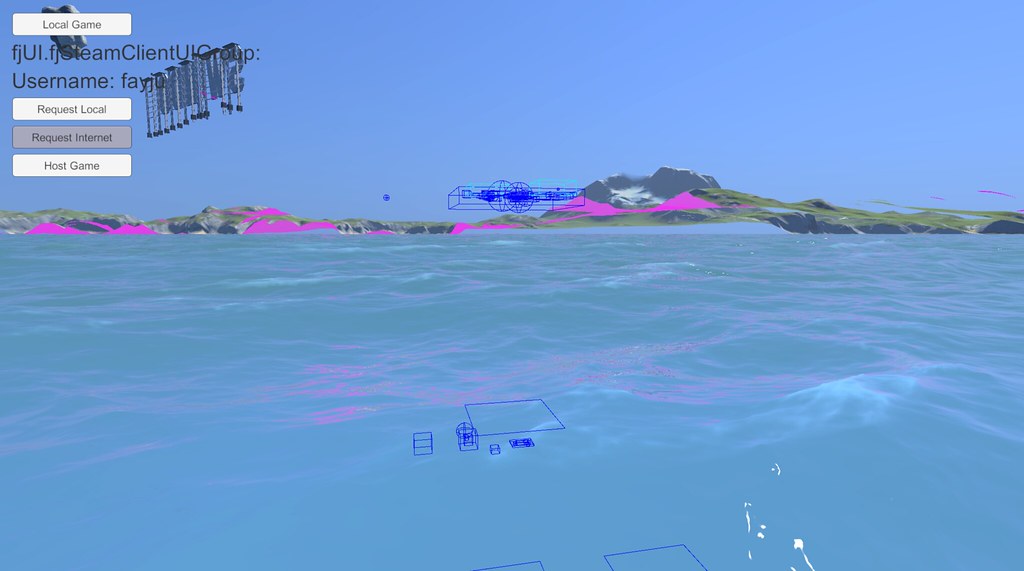 I know… I KNOW,  that there is an element of us making things difficult for ourselves by being overly ambitious and honestly I am OK with problems we make for ourselves, that’s all part of the journey. We have always been big supporters of Unity (and still are) and what it stood for, flexible scalable development, but I just find it odd that the most stable version of the Unity Editor that I work with is still Unity 4. I can’t even begin to process how their editing environment has become less stable with each increment. I mean seriously, I have been through multiple hardware setups and platforms and it gets less stable. I think what Unity can empower you to do is truly amazing, but it seems that all that glorious awesomeness comes at a price. Ultimately, they expect you to be in bigger teams. I think you need at least one developer to flag Unity bugs and converse with them on a regular basis on how they are going to fix it. Unity 2018.1 ( the new version coming ) looks very promising and much more futureproof than what we have been dealing with up till now. Thankfully, all the physics that we had to rebuild for V3 do work in the new beta, so all seems OK on that front. It has even fixed some things which broke in version 2017.3 like my UI for handling online connections. But the beta editing environment is still far from stable … it likes to crash a lot. Anyway…

I shouldn’t really rant about Unity too much, (if you want me to, I can and for hours) we still love it (the software) and V3 is still moving forward and when it works it just feels so exciting. We’ll just have to find a way of expressing our anger in a mature and responsible fashion …like maybe hiding a Unity shaped turd in the upcoming V2 update. That’s how we deal with our issues… yeah…and maybe when you put it in the toilet it crashes the game 😛

We have no intention of stopping V2, aside from the new blimp and the camera improvements that we mentioned in the last devblog (023) we’ve actually got quite a lot of interesting things going on with it. I was actually hoping that I could be writing this devblog alongside a V2 update, but it’s not quite there and we don’t have a title for it (sorry).

One of the things we had been improving in V2 was pocket mode. I wanted to establish it more separately. I often get emails from players who have accidentally turned on pocket mode and found the floor outside the wall is missing. We set out to make it so it was on a smaller island with less physics stuff and I am setting it up as a completely separate mode rather than a toggle in settings.

While we were in the Hotel in San Francisco we thought, what the hell, let’s see if we can get the pocket mode island to run on our iPhones,  it did, just fine as well. Even the main game ran just fine. We had thought about making an iOS version loads of times before, but we had never sat down and made it happen. So then we thought, what the hell lets make some buttons.

After a very depressing chat with Unity, it seems putting V2 on either Switch or Xbox or Ps4 seems like a real longshot. They certainly won’t help us to do that, So I think we may just go ahead and make an IOS version of V2 pocket mode. This is something we can control.

I mean our hopes are for Amazing Frog?  to make it to other platforms eventually, like Switch (I love my Switch) But I think that we will have to wait until V3 is more developed on Early Access. (Thank you Steam for being the awesome-est platform in existence)

It just makes sense at this stage to put at least a part of V2 somewhere else, while we can. We get many requests for it on iOS and Android and in theory,  it could help support future development of V3, especially if we need to employ someone to locate and identify Unity bugs related to Amazing Frog?  🙂

I know it’s been about 3 months since I last updated you all on whats going on. In development time 3 months is not that long, we struggle to find the time to do everything we want to do, but I do understand that it is a long time when you are waiting on an update, (If it helps, I still haven’t started playing my copy of Mario Oddessy and am still trying to avoid spoilers ) Here is the rundown of whats coming soon (in no particular order)

V2 Update with some cool new physics features and a big blimp that won’t suck (I mean seriously, you should be able to fly this one and potentially drive a car into it and drive it … well I haven’t fully tested that bit yet but seriously better blimps all round ).

We have a lot on. I know this, as it feels like crunch time,… It’s time to get our Frog on.