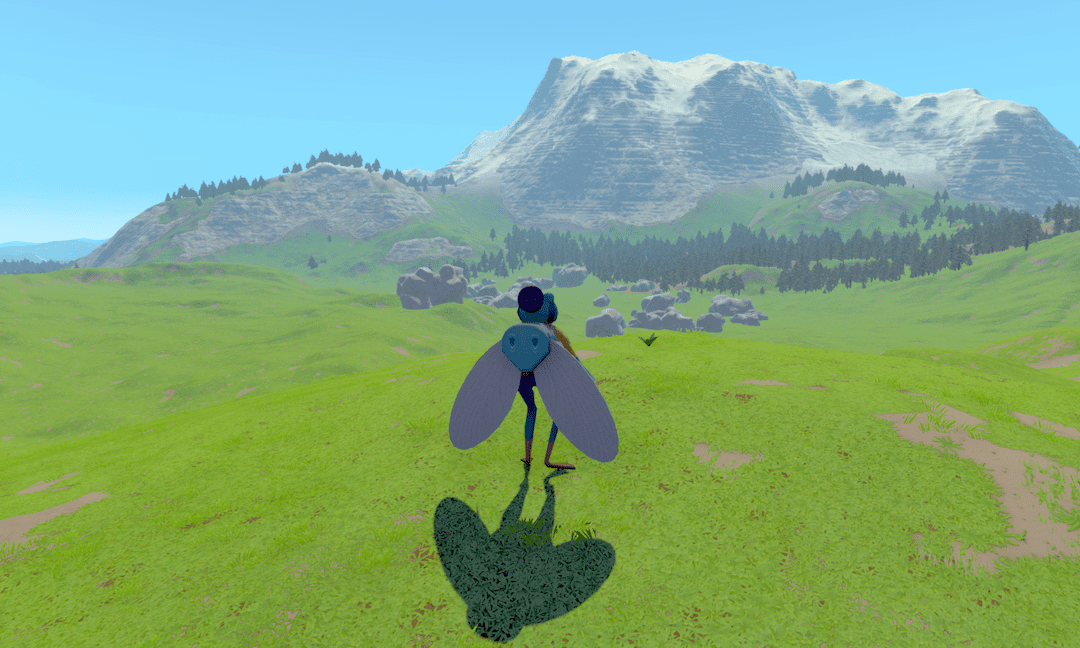 Hello again.. (you can also read this post on the steam community here )

I must apologise that I have not released any information for a while. As I have said before – I know how important developer blogs are to let you know what we are up to. In this case I started writing this a few weeks back and then I end up showered in errors( of my own making) 🙁 Mostly I just like to get on with stuff 🙂   Beyond that, I have said it before … I find writing frustrating at best 😛

So, after The Flight School update at Xmas with the Giant Alligator, we kind of threw things up in the air, purposefully of course! I know many of you were expecting a V3 beta update, it didn’t happen ( YET! ) and  I shall try to explain why in this post, also I hope to explain what we are working on so you can get an idea of what’s happening next in the immediate future and what will follow.

I’ll start with what we were going to do. We had intended to follow up the V2 Flight School update with a quick update primarily to help you physically move things around and new toilet overflow system for making unlocked activities like “Giant saddle on Alligator” or “Shark Blimp” or flying “Megladon” much easier to “reactivate” and then we were going to release another V3 beta in the new year. Well, it didn’t go as planned and in typical Gaz and Hal style, we changed our minds and decided to smash both those updates into one action… I shall explain why but first:

If you are reading this blog with no idea what V2 and V3 are… Welcome! To be honest I am not sure I know any more. They are terms we use to describe developments, but things have changed so much. So as I write this – this is how we think of V2 and V3 or to be more specific the version of Amazing Frog? that we are actively working on.

V2 describes for us the active version of Amazing Frog? this is defined by being on Steam and also the pocket mode available on IOS this version is built in Unity 4.7.2 and has the downside of being built in older tech but the benefit of having years of content added.

V3 describes the newer version of Amazing Frog? that we have been working on in the latest version of Unity it has a much higher resolution environment a day-night cycle is built on much better architecture and we are actively building online multiplayer for it (but have not released that yet)… the downside is it does not have as much content as V2

V is effectively short for “version”. Version 1 was effectively a version on OUYA, Version 2 we released on Steam and Version 3 is the future. But just to confuse things I may well change all that. As V2 is changing. The work we are doing on V2 should allow us to distribute it on more platforms meaning there will be multiple versions of V2 more so than just Steam and pocket mode. But I will talk about that in a bit first why has there not been a V3 Beta Holiday Update? 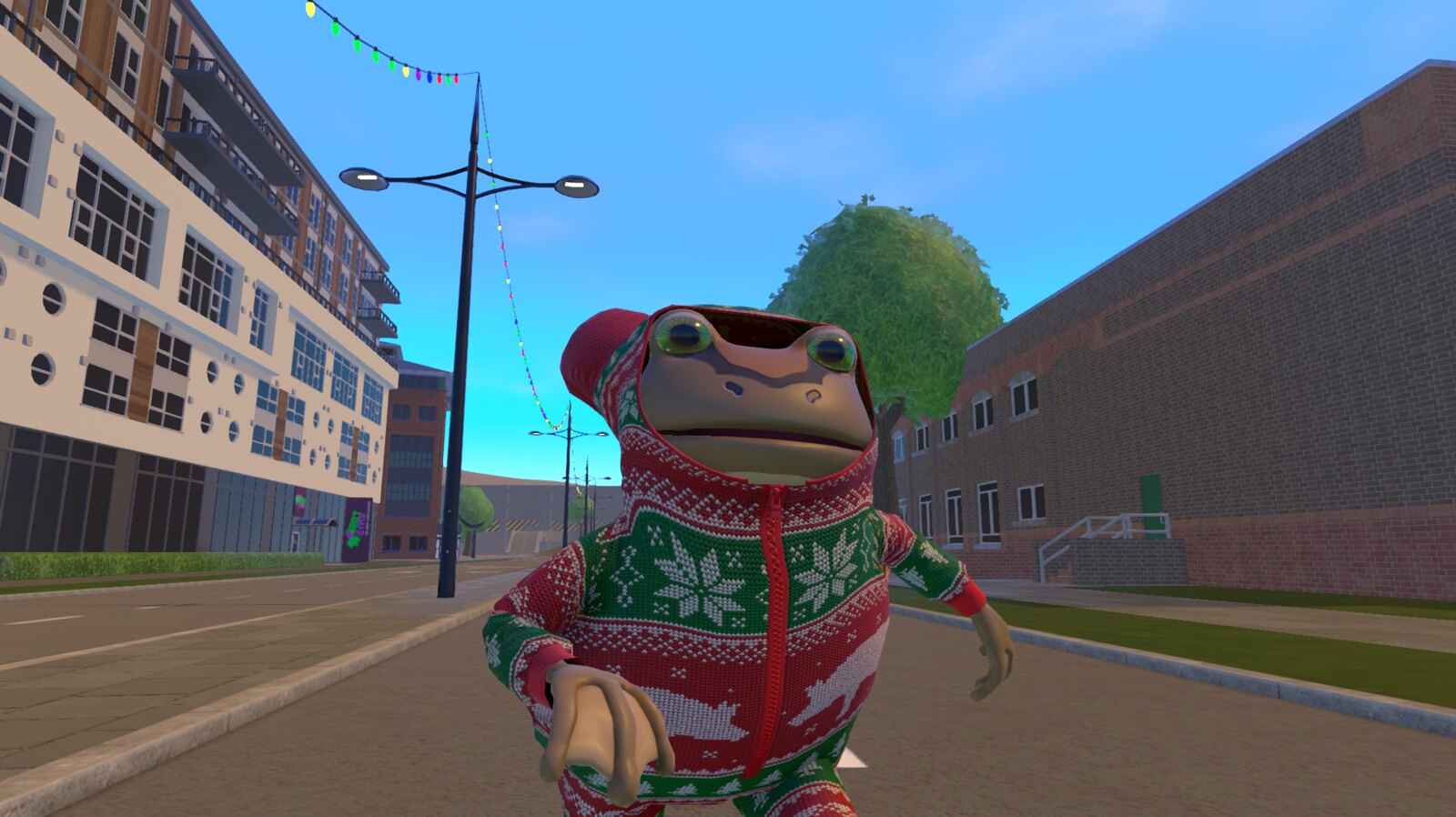 So why didn’t the V3 beta update happen in the new year? A lot of it comes down prioritising out time in line with an overall plan of action. Ultimately, we want to make Amazing Frog? available for more platforms and be able to keep updating it. Last year we made some big steps in this direction, but our methods were slightly flawed and needed change. Basically, in October our intension was for V3 to replace V2 so we would carry on just working on one project – V3. For some time we have felt that V2 was dying, left behind by progressing technology. Our solution to this dilemma was always V3 a new version and also a chance to erase our mistakes and build something cleaner and more professional. Perhaps blinded by pride and ambition we felt the best course of action was for V3 to replace V2. We converted what we felt we needed from V2 to augment what we had created for V3 and throughout 2019 were of the mindset that V3 would replace V2 and during this ongoing process, we spawned the V3 beta of Halloween 2019. Unfortunately, we started to see the error of our ways in that we had approached this process with the wrong mentality. We found ourselves saying things like –  We don’t need X or Y feature from V2 as we can simply “recreate” feature  X or Y as we continue V3 development. This process was going to force us to spend more of our time building and not leave us in a position to release much. One example of this is that I didn’t take any of the weapons or pick up mechanics from V2 as I reprogrammed holding items to work with a new character system in V3 (honestly its much better in V3)

V3 started to feel like it should be a sequel and not a successor. In thinking of V3 as the successor to V2 it paled in comparison. It was like going back to the barren Amazing Frog? versions of 2015 before we had added sharks even, but with better models, nicer mechanics and real-time lighting. It was beginning to feel like we were taking leaps backwards for the sake of some more contemporary technology. Obviously, we are not going to stop Developing V3, we want a day-night cycle, we want frog fingers! we want online multiplayer and we want to make “F.A.P.S”. a thing… but we are not ready to lose everything else that we have built up over the past few years in V2 and the dilemma is we couldn’t integrate what we have in V2 without rebuilding it all so we changed our philosophy.

Messing about with a Giant Alligator Opened my mind

I was not happy with how I was rushing V3 to replace V2 – As December 2019 approached, we wanted to deliver a “fun” V3 Beta Update.  I found I was just taking things from V2 to make V3 better and started to feel uncomfortable with this approach. V3 needed more time and careful consideration to be as fun as V2. From a development point of view, for me as the programmer at least –  there is a certain clarity and purity about V3. This is because it allows me to build more complex core systems, like Multiplayer, and integrate them from the ground up.  Rushing content in was breaking the integrity of the project and not what V3 was supposed to be.  Xmas is always a panic month for us, I no longer remember Xmas without an Amazing Frog? Update and honestly, I love it. Throughout 2019 we had planned to replace V2 with V3, but by the time November hit I realised how this was not a possibility in the short term. I distracted myself by making a Xmas V2 mobile version. I didn’t think it was possible any more as Unity 4 was so out of date. Nonetheless, for a distraction, I thought I would give it a go and with some weird workarounds I found a way and put the Xmas content onto Apple and I found myself in V2 project again with Xmas knocking at the door for a Steam update…

So I made a giant Alligator, OK?

Initially, I was just experimenting, but after chatting with Hal we decided to go all out on the Flight school Update for a bit. We had kind of shelved Flight School in April or May after the Drone Update in favour of concentrating all our energy and resource on V3. Simply put – I couldn’t bear not having a “Holiday update” So we reactivated it, crunched and launched that at Xmas…

We had been prepping a V3 Beta update… Among other things, Hal made onesies for every outfit from v2 into an actual onesie in the V3 Beta that you can change into (if unlocked in V2)… We were pretty excited.  We made the cars better and more of them, added a film studio, replaced the landscape with a higher detailed Landscape, fixed a bunch of the silly door bugs like when you enter the… Hal made a Xmas light generator… and we hung a few pictures in the Gallery.

Actually we did a bunch of stuff we are always making progress, but for now, we put a pin in V3.

You will get a V3 beta Update, but first, we wanted to try a different road 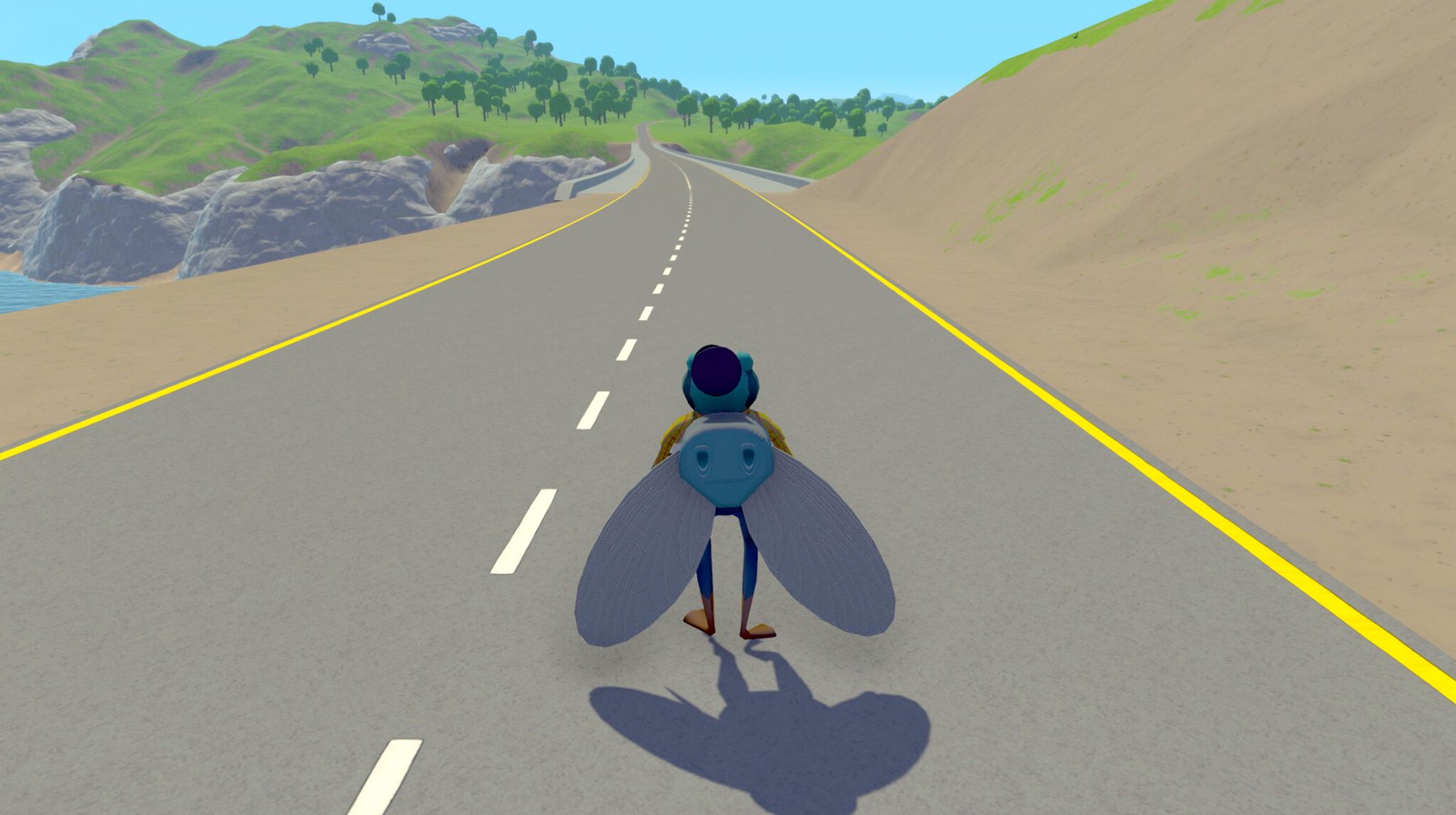 In January Hal and I had a careful think about where we were with development. Subsequently, we took the difficult decision to convert EVERYTHING from the V2 flight school update to Unity 2019.3 (the software we build V3 in). Once we had come to terms with the inevitable fact that V3 was not ready to replace V2 there was only one road we could walk down and we have gone all out on that route.

A complete conversion of V2 with no content left behind opens many new doors too. It’s a big change in direction, but one we are both pretty happy with. Some times you have to analyse your actions very critically and break a few things to make progress.  Maybe not in a “Thanos” way… Disclaimer-  We are not advocates of Thanos’ philosophies, but more in and eggs and omelette kind of way. 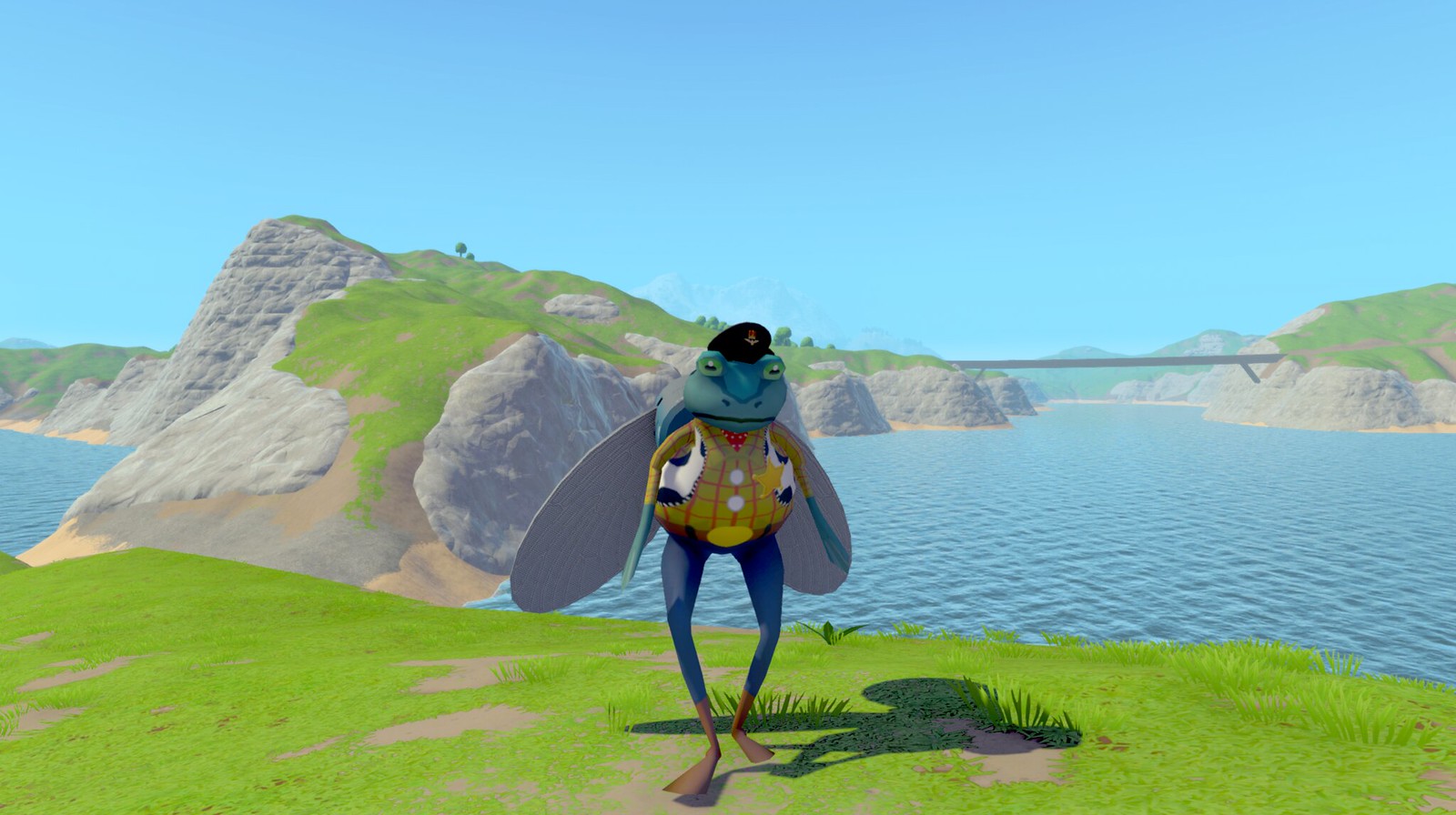 There are still a few outstanding issues from me in the systems conversion, but this has given Hal plenty of time to go nuts on the V2 landscape. So much is now possible in V2 now the project is in 2019.3, trees, rocks, water landscape features would now be available in V2. Making the world feel much more as we originally intended but could not originally achieve. In some tests, it has run better on my older laptop than Flight school. Finally, V2 is taking advantage of newer processors and graphics cards.

More detail does make it easier to get lost in SwindonShire. 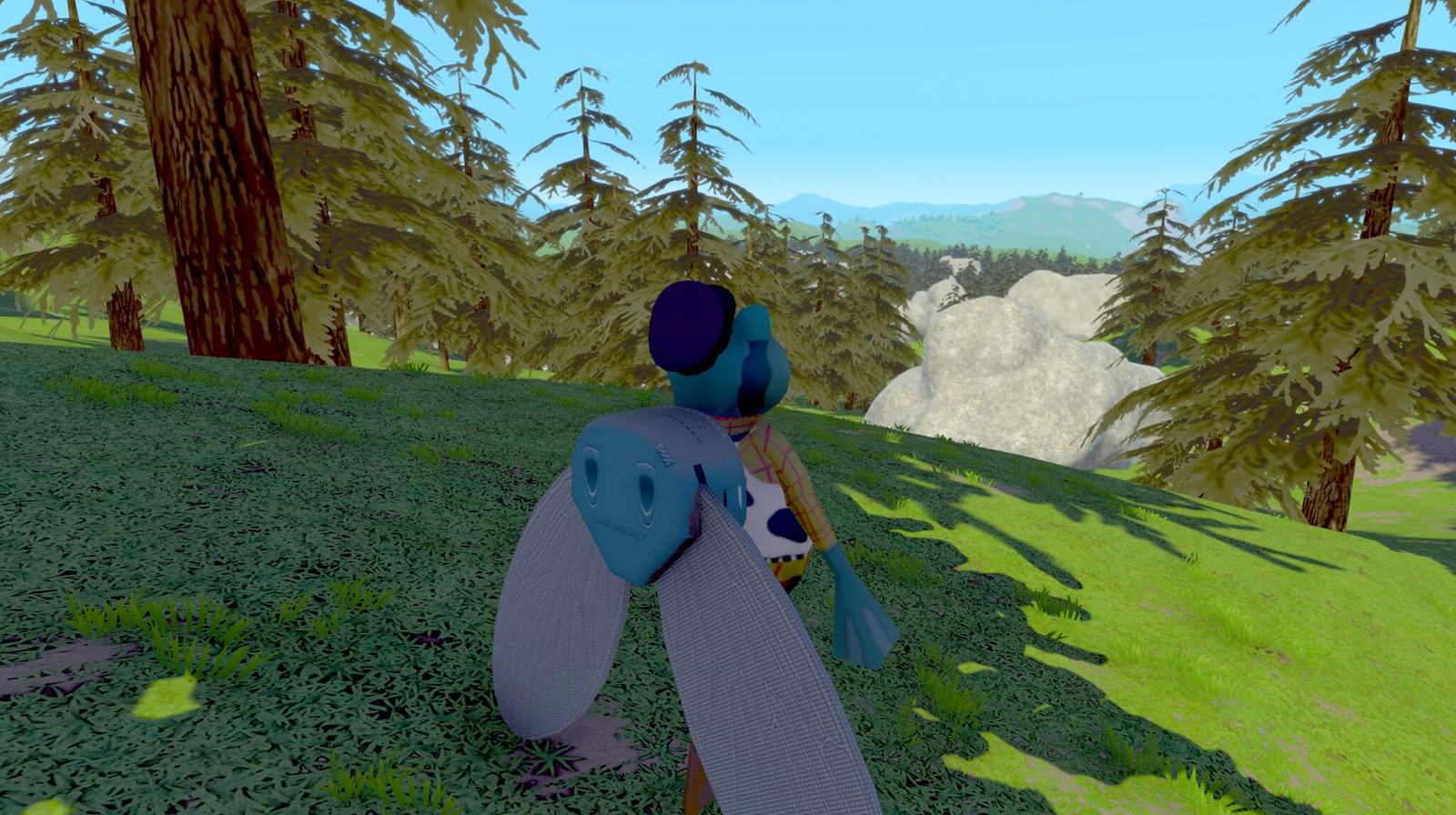 Its been a really productive few months and I think we are on the cusp of our best update ever. The oddest thing is its V2 update.. only it doesn’t feel like V2 any more. 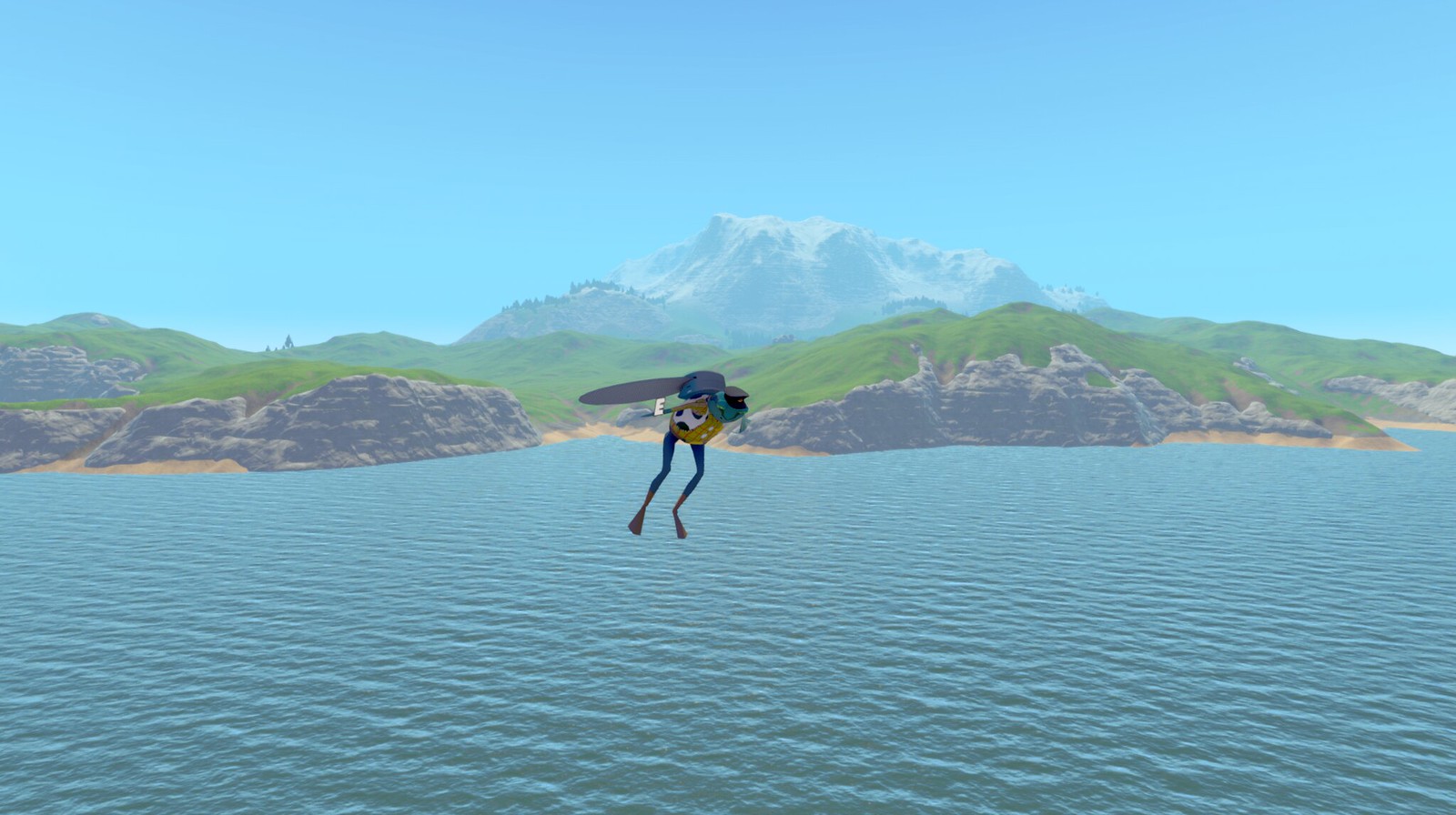 I cannot lie converting the ENTIRE project from unity 4.7.2 to Unity 2019.3 has not been without its issues, but… 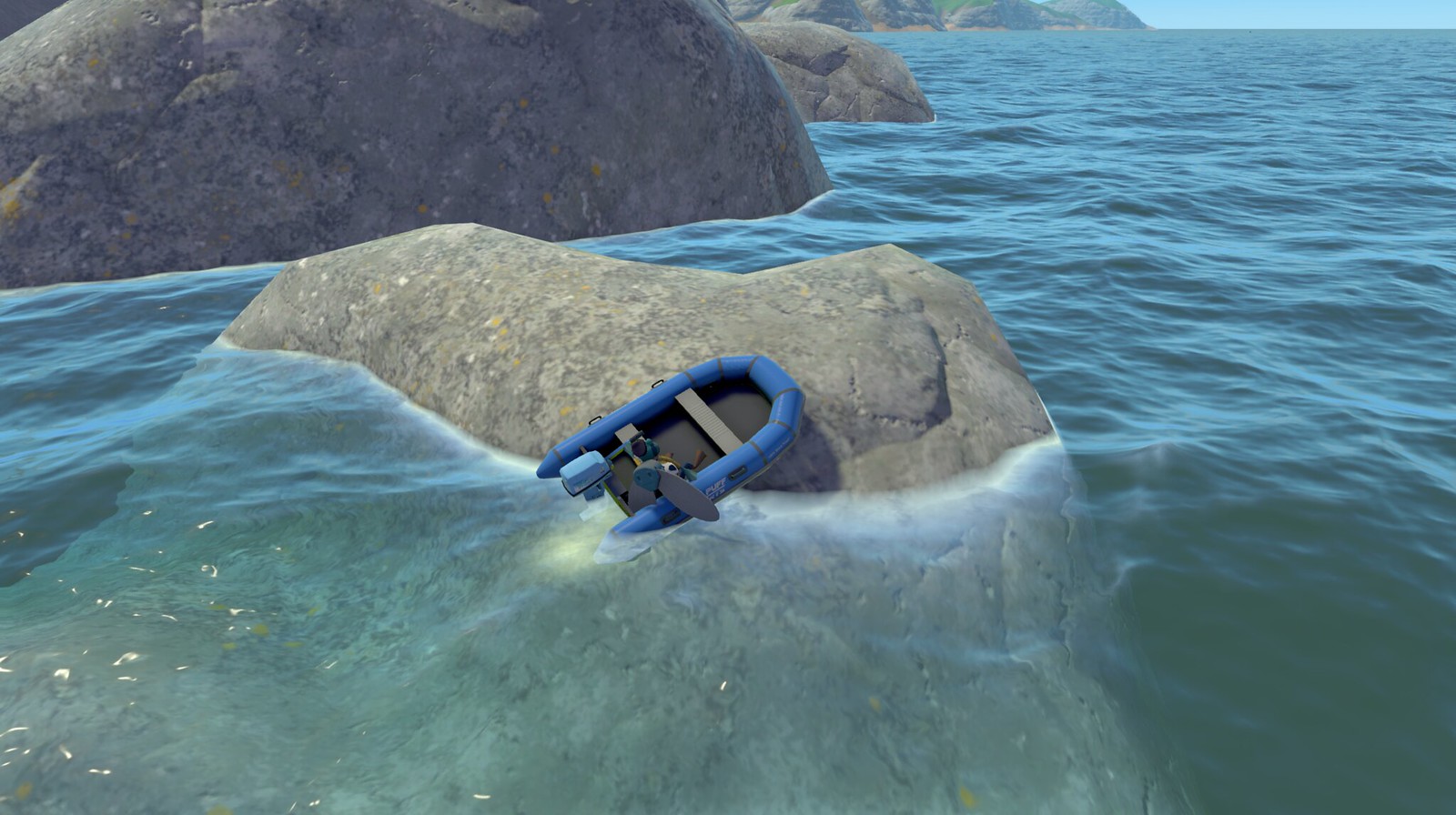 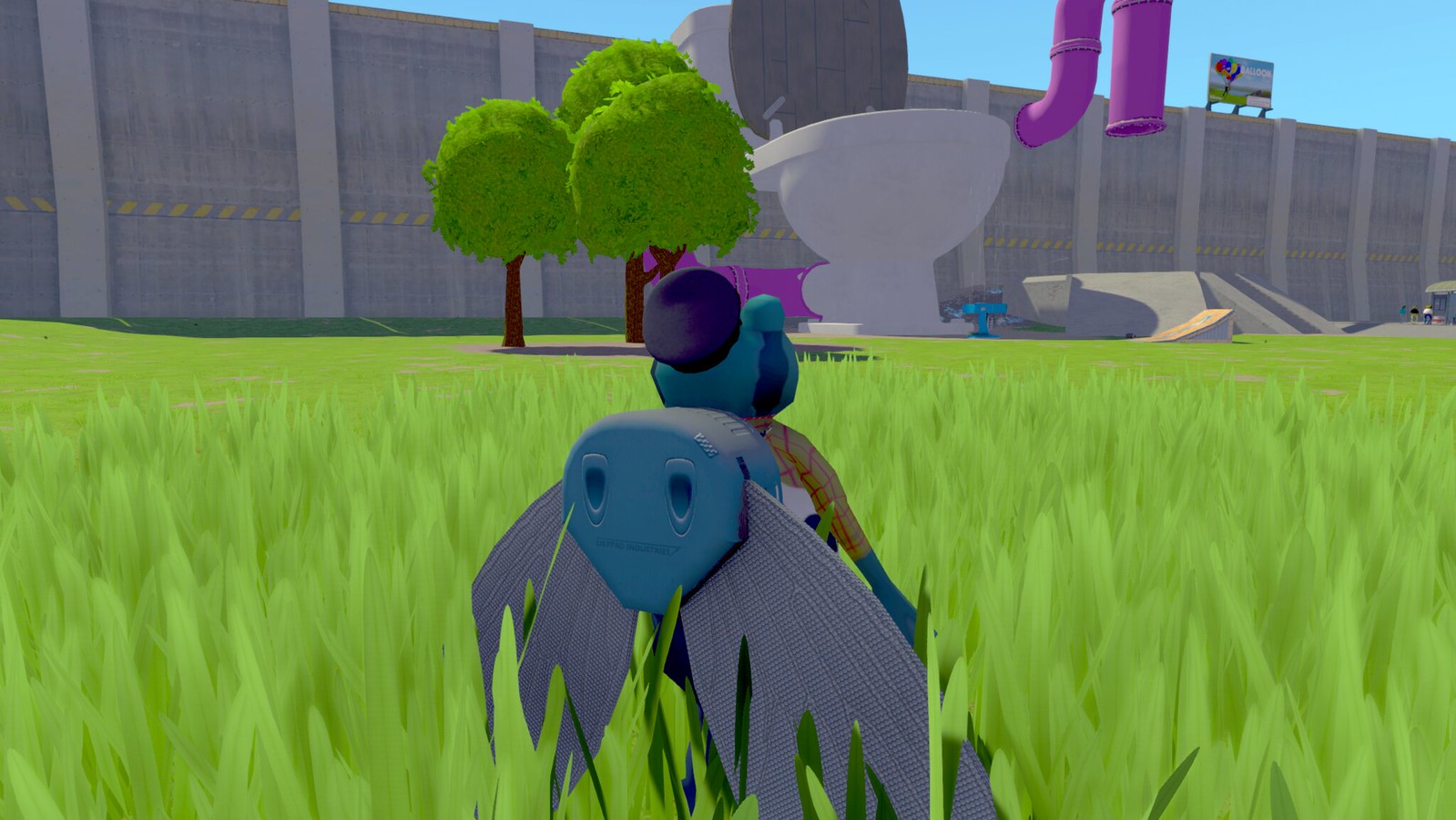 I can’t tell you how long we wanted grass….and lawn. 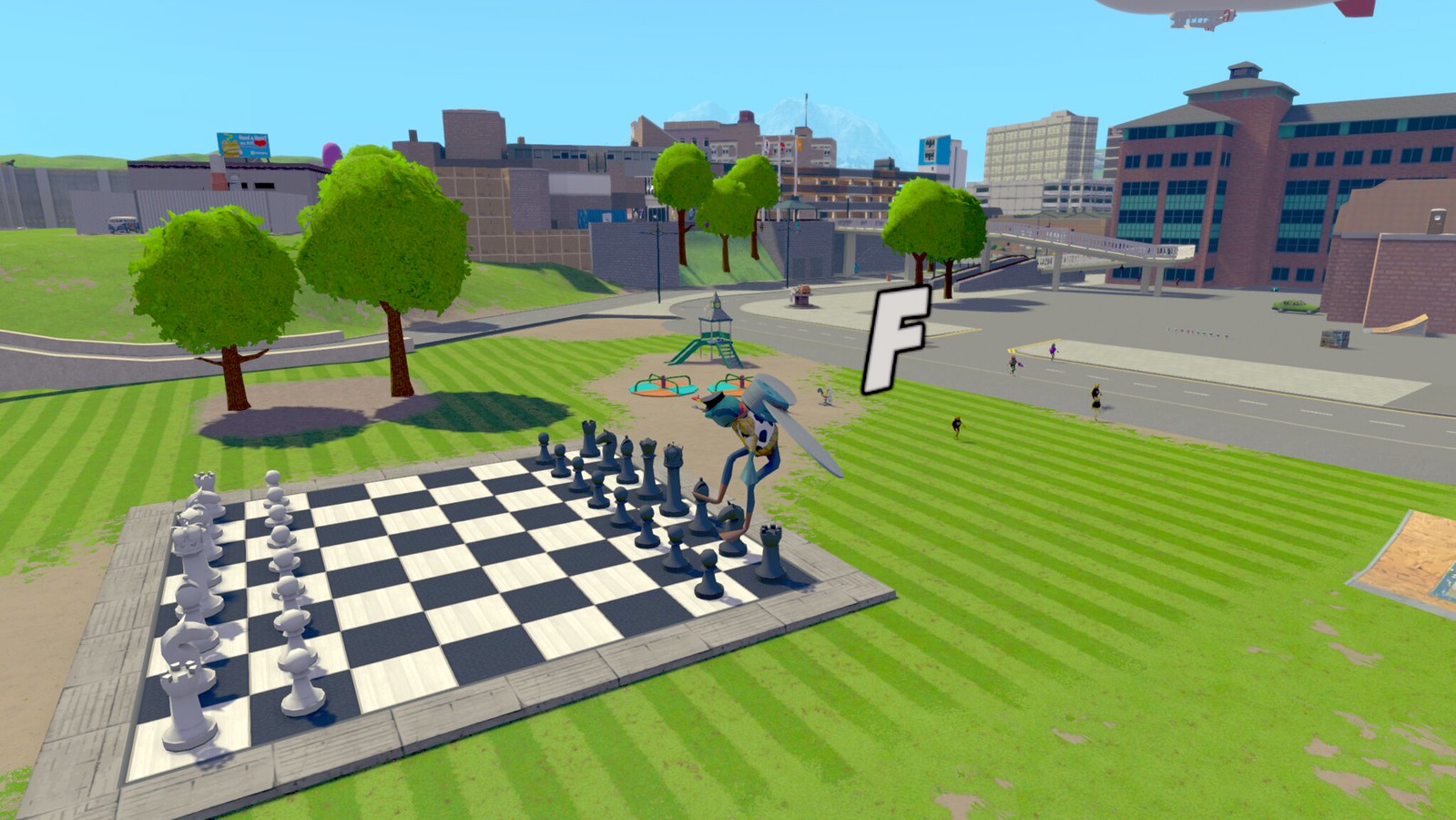 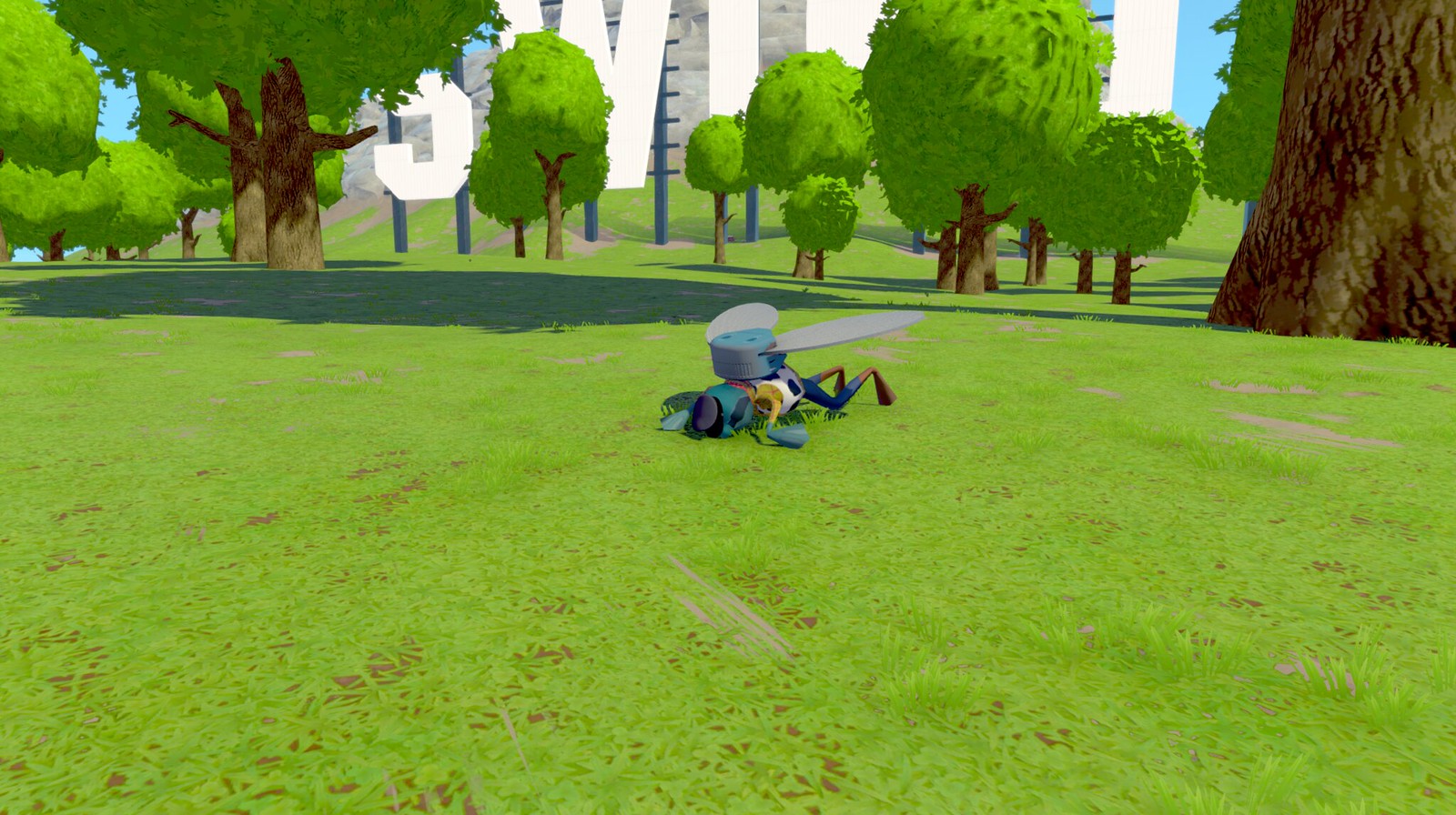 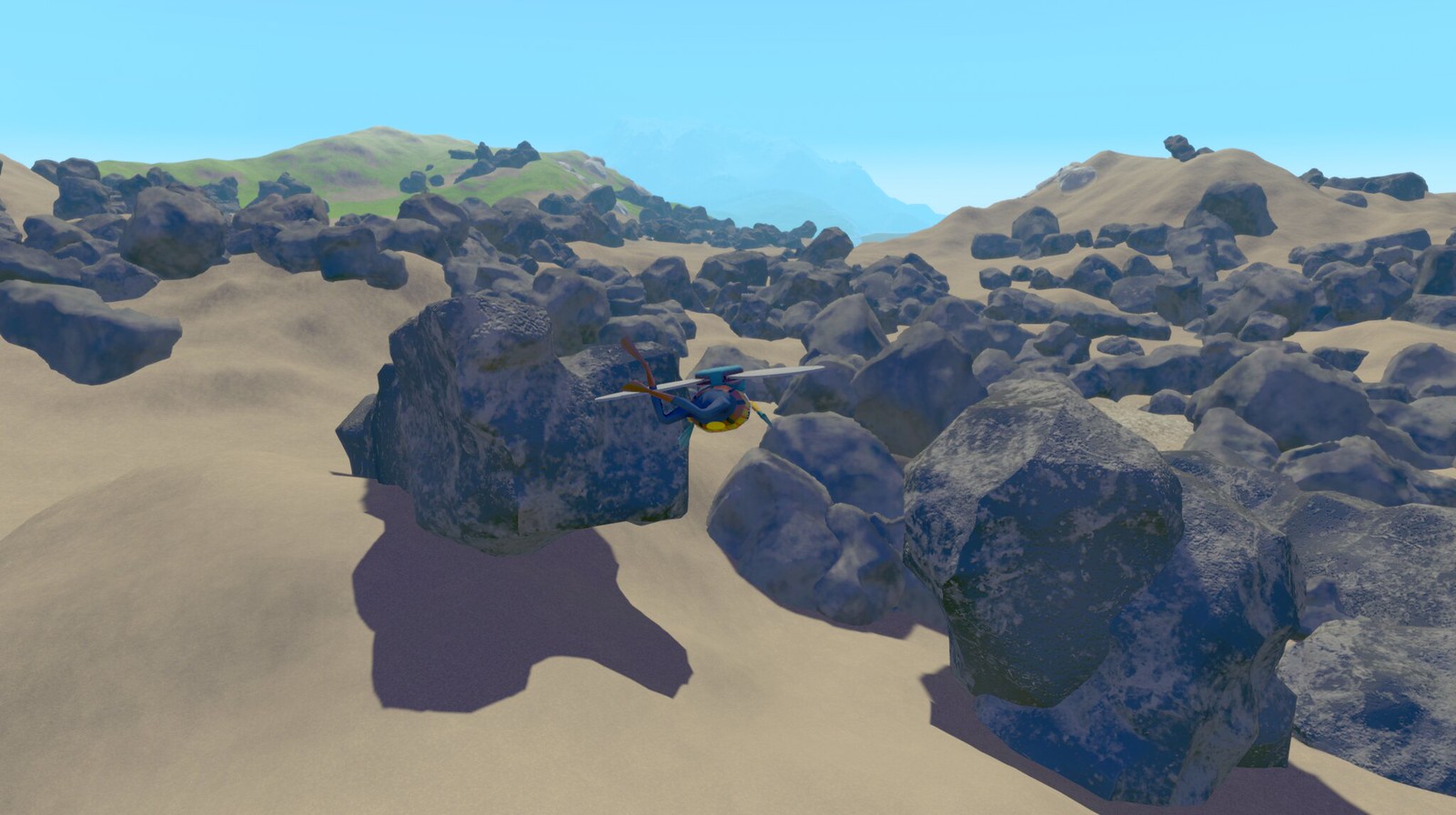 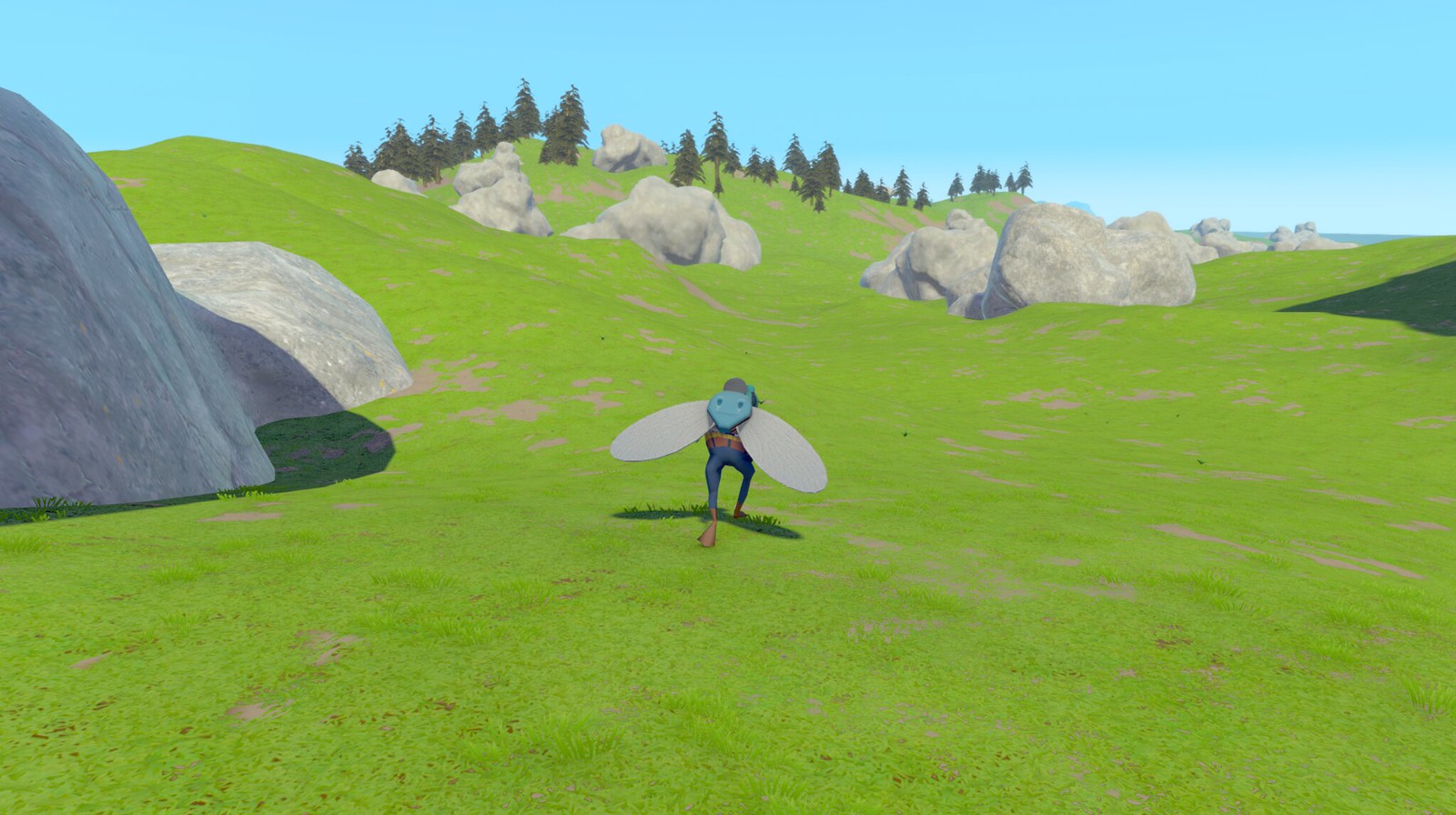 did I mention trees? 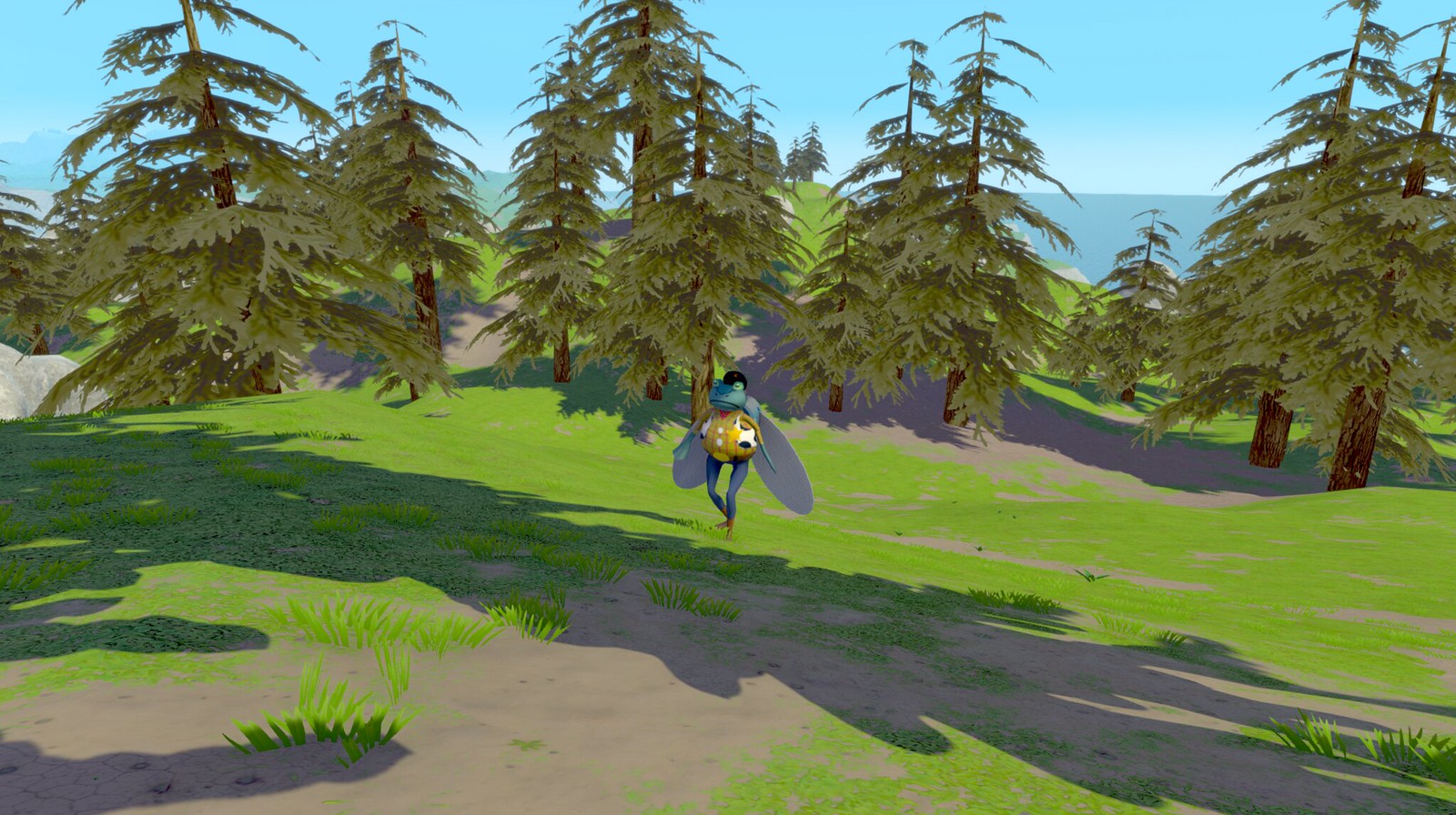 cos we have trees now 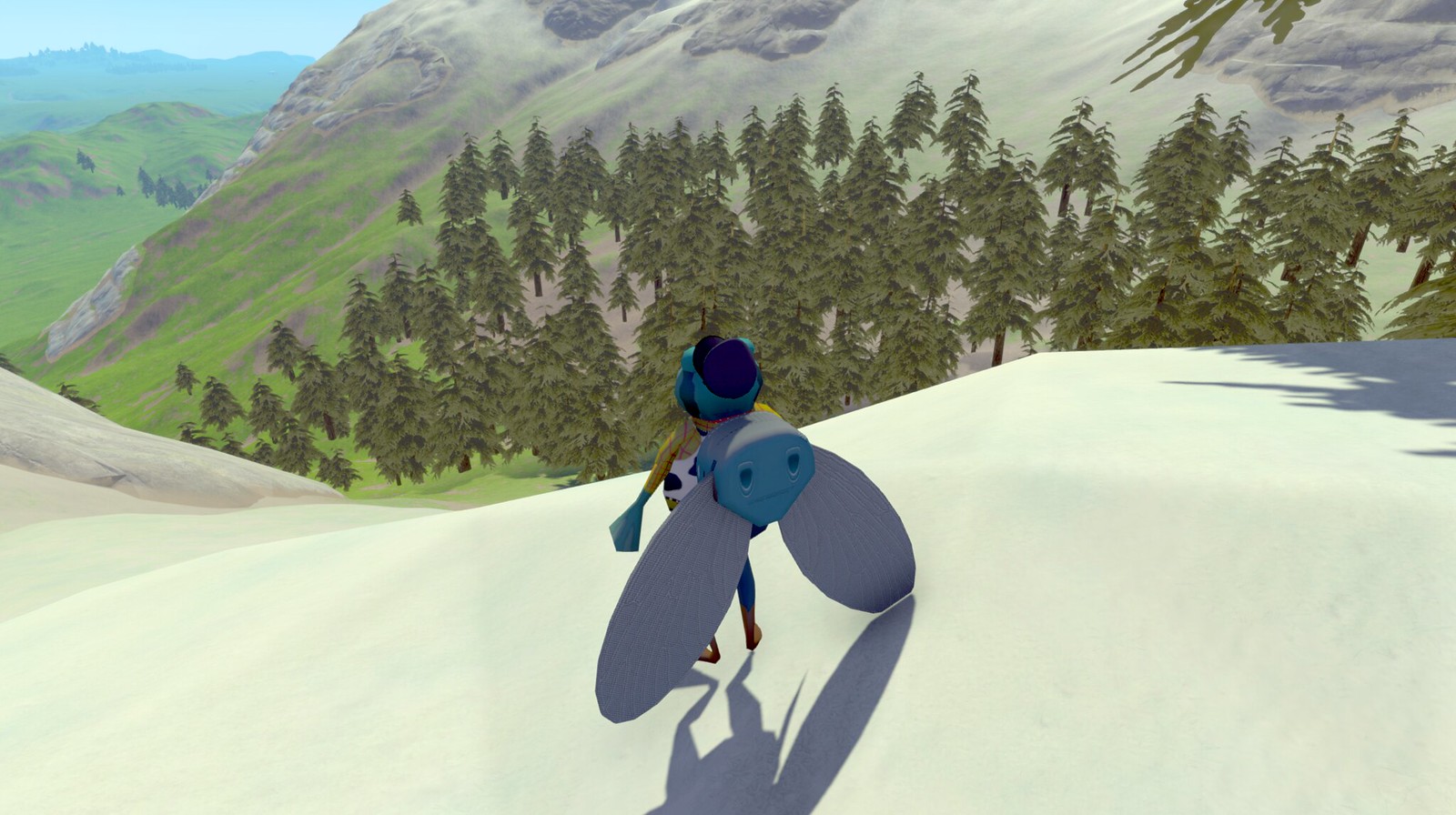 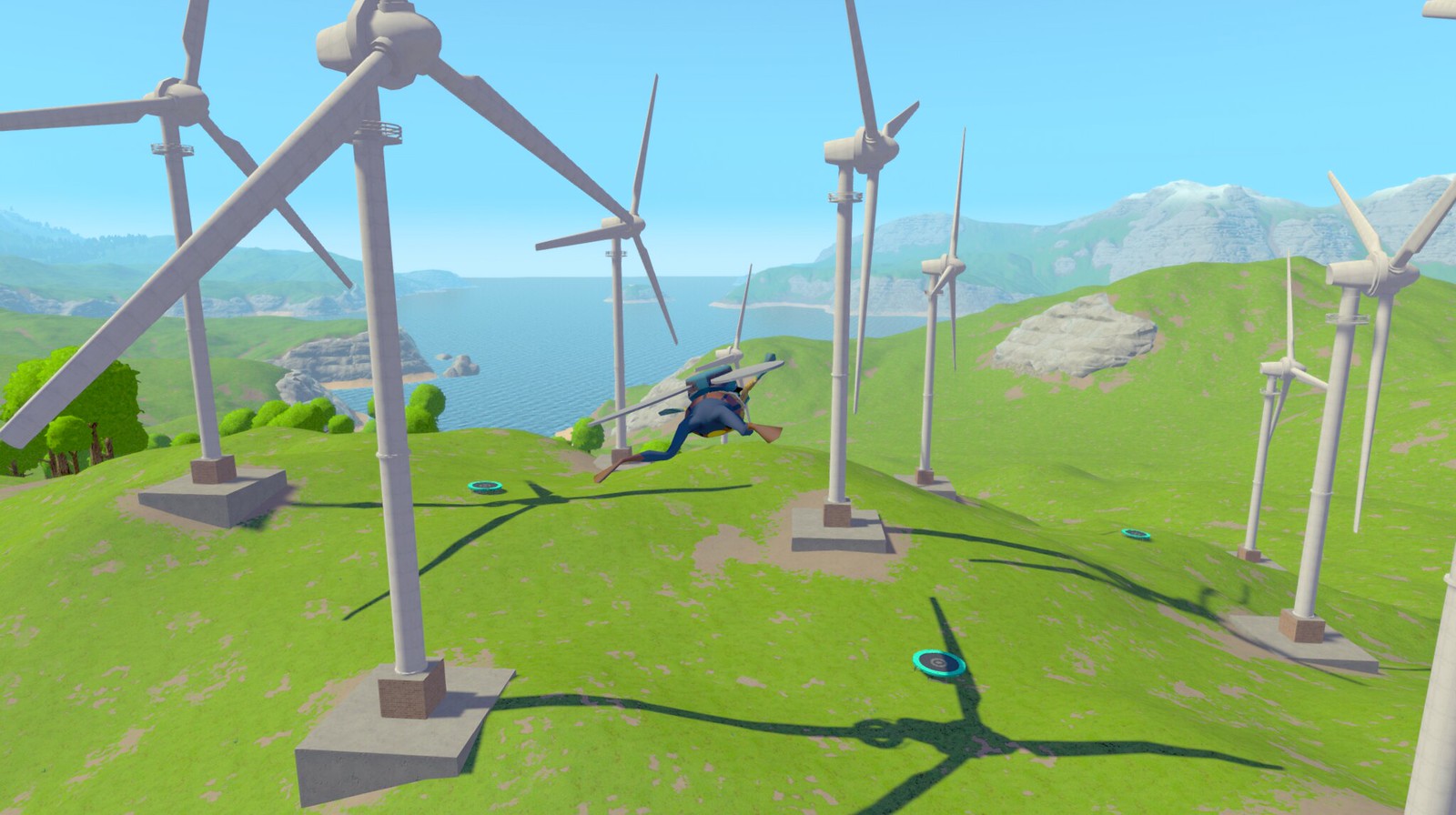 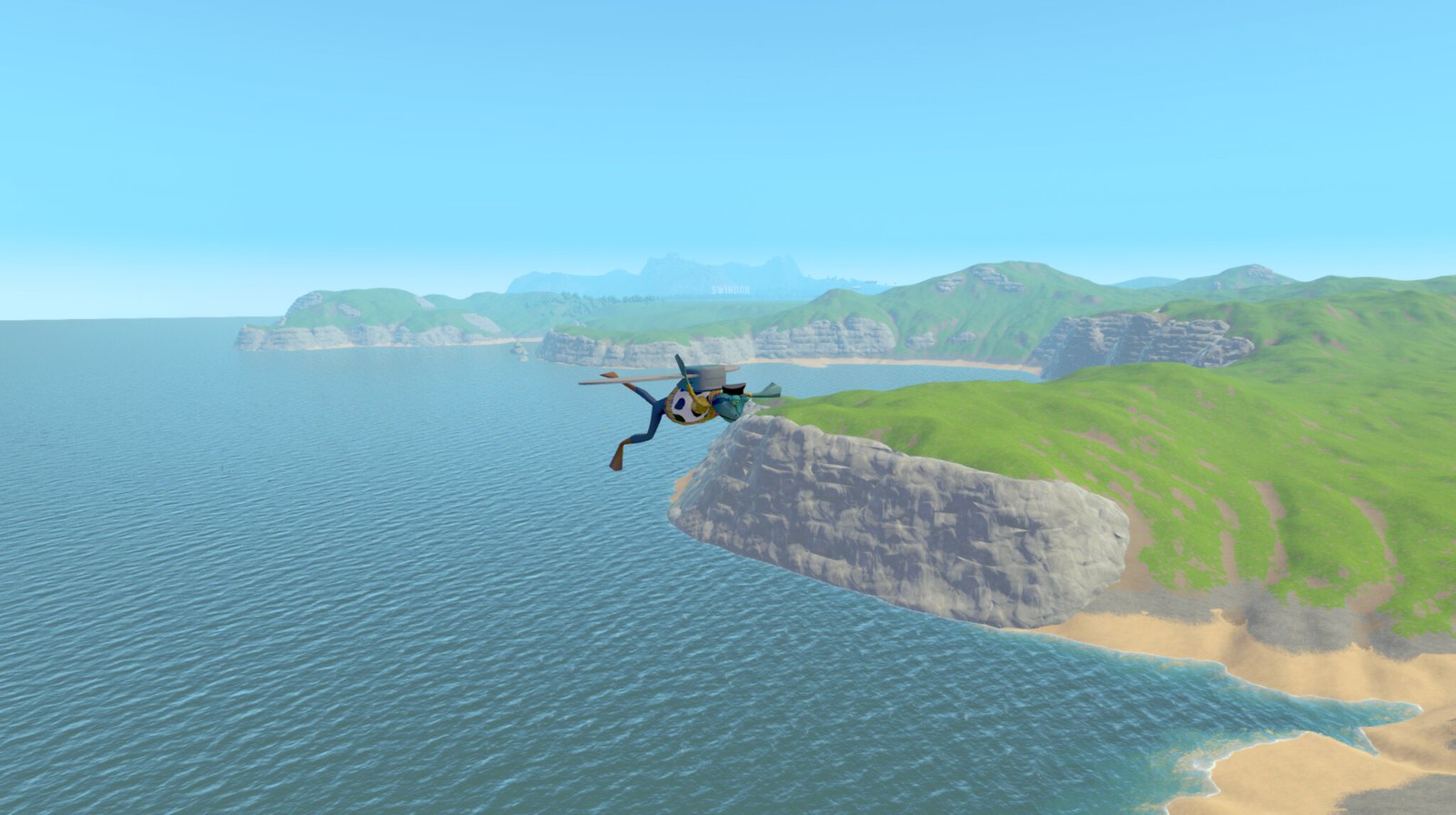 And better water… (with wildlife in it) 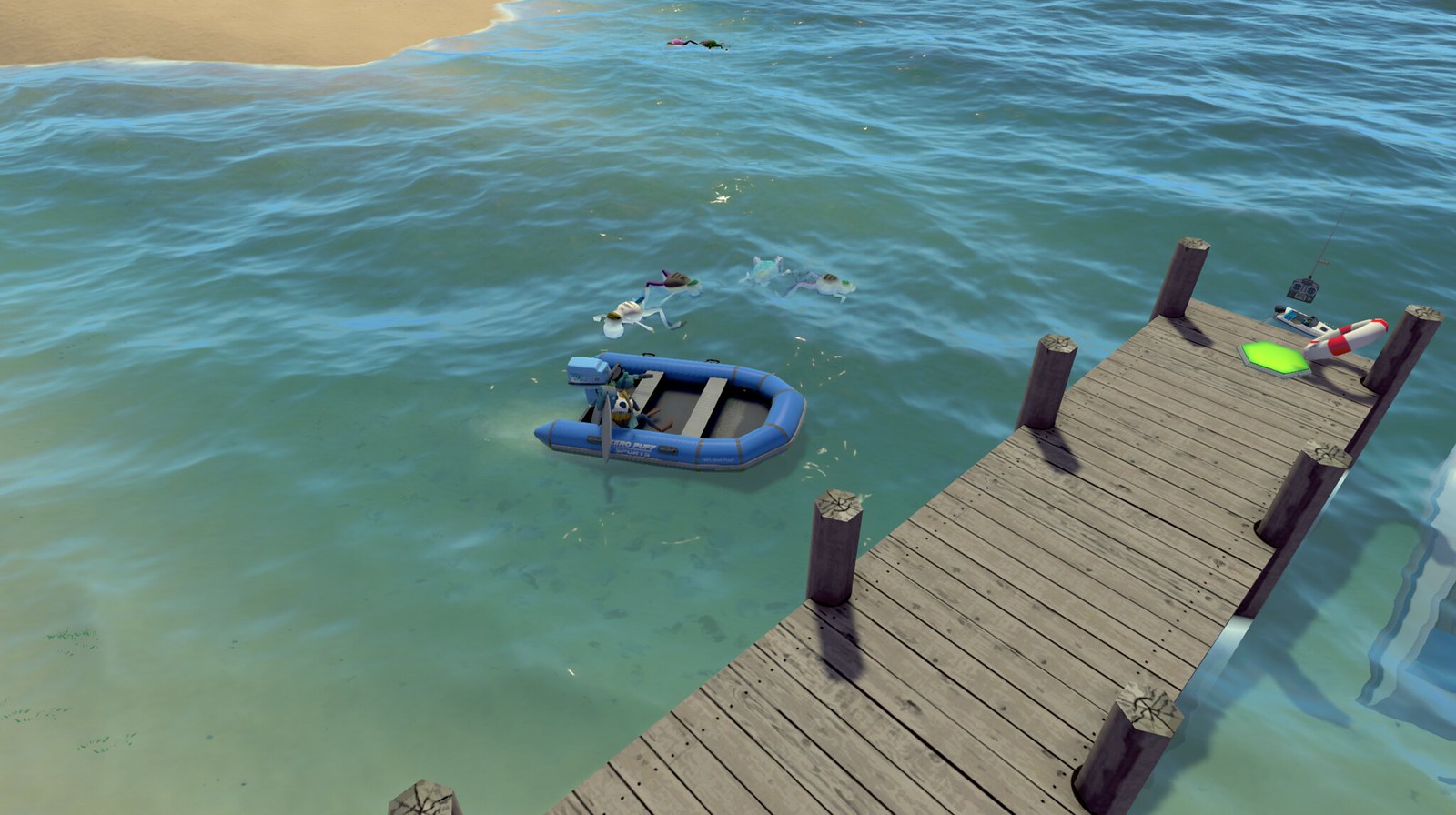 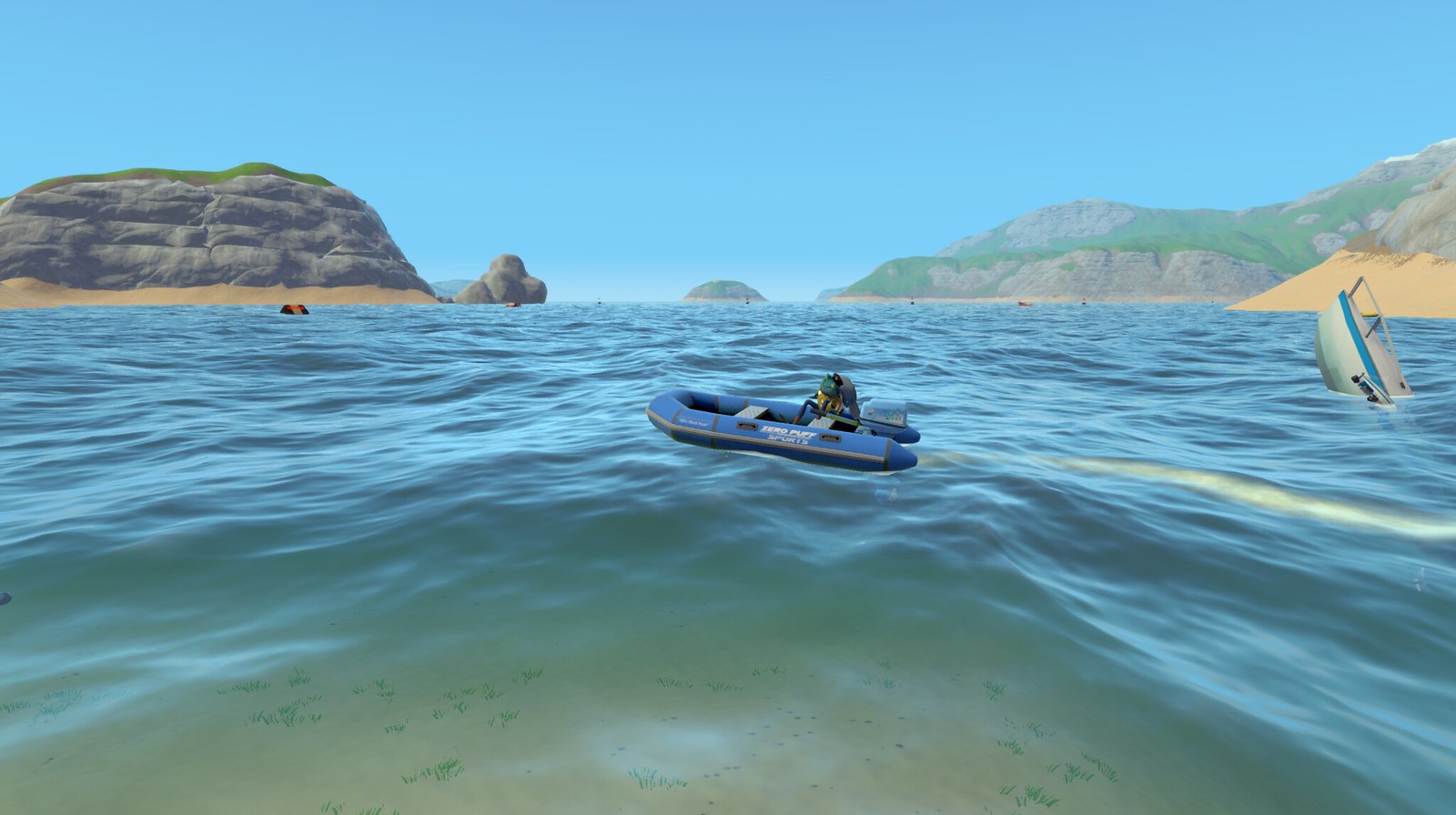 I hope the images explain what we are doing. I always feel there is so much more to say. I was going to talk about the pitfalls and problems we had with “game design” if you can call it that. Like how the balloon Jet pack, for example, has been a hindrance as much as an advantage in designing what features we add next to the game. Or how we feel about just being 2 developers and should we expand? Or that GDC got postponed, or like how we will make it easier to move big objects around and not take a day to get a saddle on a giant alligator or the Hat app or more practical things like building a Fayju account system so you can save data across platforms and not lose it, or that we will output Flight school to iOS and Android with split-screen, very soon.. Or what platforms we want to take Amazing Frog? to this year…There is so much to talk about and honestly, i never know where to begin or end with these posts… 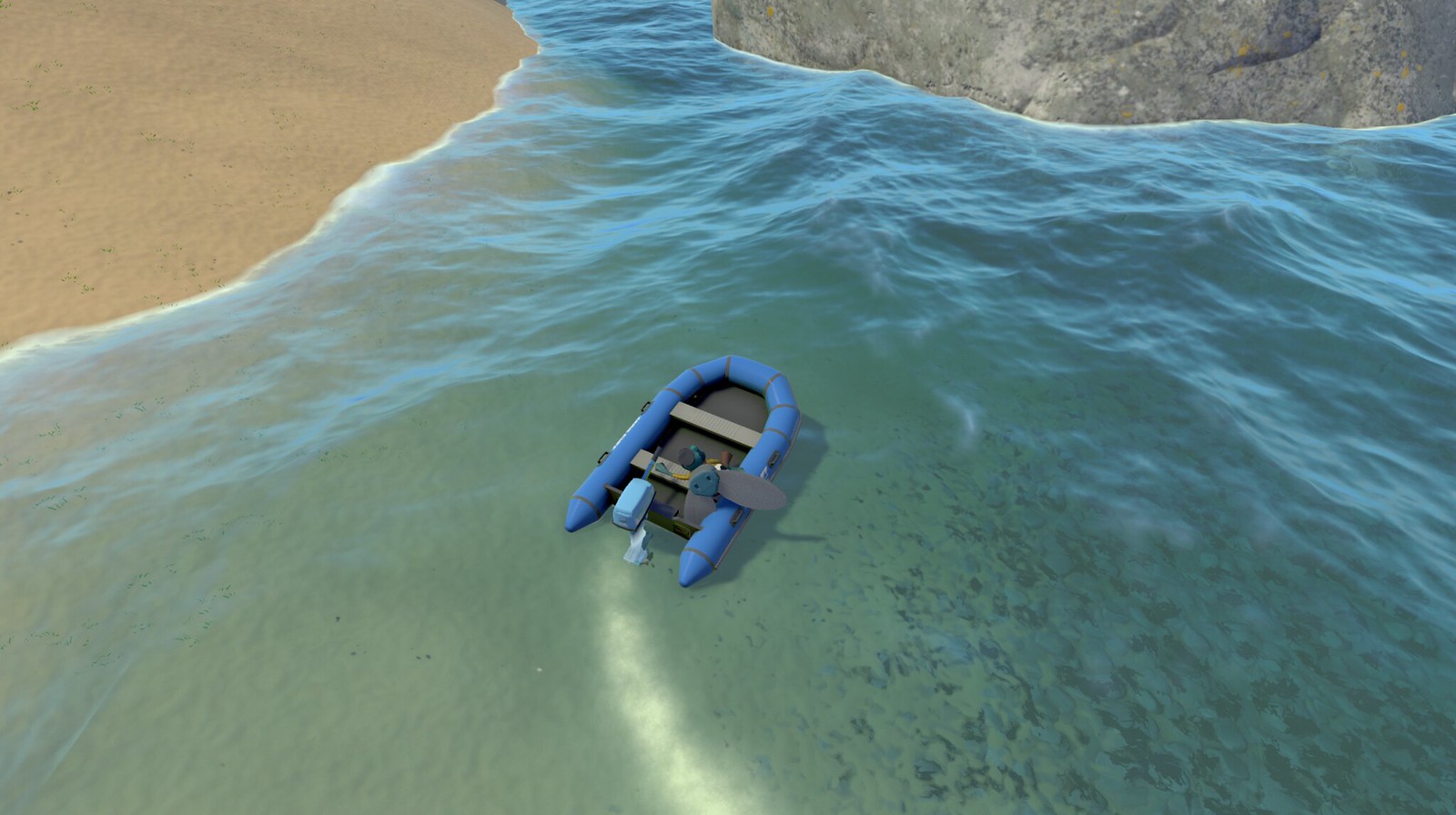 but I will say this – Thanks for playing Amazing Frog? I can’t say it enough – we love working on it and are so grateful that we can.