Working on a game with the scope and ambition of Amazing Frog? as just two people has an endless list of problems.Often the tasks we set ourselves can become so vast, that we spend little time doing anything for Amazing Frog? other than game development. This is a problem, as fully self published indie game developers, we know how important all the other activities that surround development are. The trouble is that when so wrapped up in development as we are, any other activities fall in the “not a priority” category. So when we can, we try and solve all and any problems with ongoing “game development”. Some of the ways we go about solving problems amuse me, so I thought I would highlight one of these “solutions”. This is why we made the “movie camera” and how it solves a problem for us.

We needed more “arty” or composed screenshots and we needed better footage from the game. And ultimately we want to make cut scenes, but what we didn’t want to do is spend a whole lot of time rendering and composing and that would slow development.

The Movie Camera was one of those great idea moments that Hal has so effortlessly. I would say these moments are frequent and generally result in me having a minor panic attack at the sudden realisation that he will make a model and I will not be able to resist the temptation to plug it into the system and build some new classes for it. It was simple, I was tired from editing footage to make trailers and screen shots. I mean we haven’t really updated the store page in a year, which I am sure is not very wise. We needed better camera work and I was on the point of building something when Hal suggested we get the frogs to film it. Now I get that most games these days give you the ability to take pictures and capture footage from the games you are playing, but sudden realisation at this point was that giving the frog a movie camera to frame and compose shots was actually fundamental to our future process.

The movie camera was made as an early tool in the Amazing Frog? that we knew we would need later in the process. Initially the movie camera shared many of the problems that we were having with the weapons. we couldn’t transport the camera far from the Swindon Town Planning office, it was not great to aim with or hold, so we had to fix the underlying problems of the “frog system” this enabled some of the newer processes such sniper scope, holstering, telescope. Now it shares some of the future problems we are tackling, like shooting from a car, how to keep weapons and ammo?
By the time we had the camera performing more satisfactory, our plans had changed a bit. While we are still planing on building a kickass trailer and bunch of movies for Amazing Frog we realised that we needed flybys as well. So we are now looking a making cameras available in other formats, like the possibility of a go pro hat or a quadrocopter to take different types of footage, so one thing leads to another. For now I posted the Best Frog in Show video, which is just us messing about with the current Movie camera in Amazing Frog?

below is an photo taken on set while filming Best Frog in Show with Gaz Frog and Hal Frog. 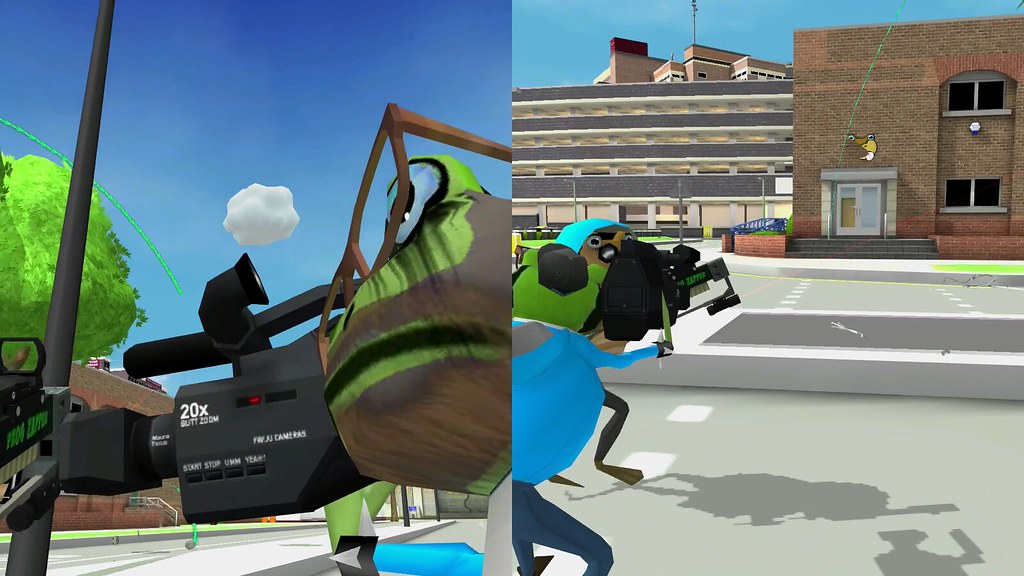 Up next … Death Matchs