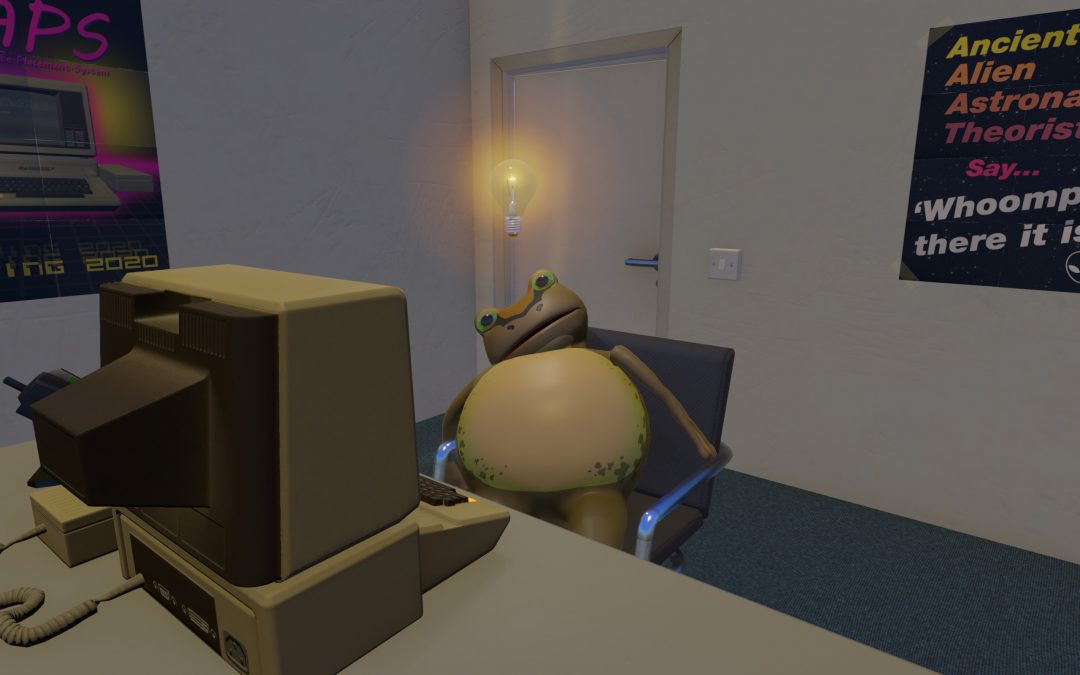 Happy new year! Long time since I wrote one of these…(available to read on Steam here) Here is the short version:

On Xmas Day we put a new Amazing Frog? “V3” update out. This was a MASSIVE milestone for us and one that we wish we could have reached sooner. Also, just now, we put another update out with some more UI options better train and car impacts and a bunch of bug fixes.

It’s taken much more time that we had hoped to get comfortable with “V3” – Or as I now like to call it “Amazing Frog?®” We had worked with V2 ( “Legacy” ) for many years and as some of you may know it was build in a very old version of Unity. We tried for many years to bring the Amazing Frog? Legacy version into newer technologies, alas we never felt we could recapture the essence of the Amazing Frog? gameplay. We came close last year with the “halloween V3 beta” but while preparing the next update for last New Year we just felt there were too many holes and neither Hal or I was comfortable with how it played. So throughout 2020 we started again. (When I say started again Its never really from scratch, but we rebuild and restructure)

We wanted to get the core systems more reliable and scalable and maybe I will talk about that in a future blog like the why of F.A.P.S. Our goal has always been for Amazing Frog? To be an online multiplayer game, but for this to happen the underlying structures of the game needed to support this. It will not be too evident yet how the new underlying systems work in this new version of Amazing Frog? , but it is going to help us massively in further development. The bottom line is that you will now begin to see much more frequent updates as we begin 2021. With more updates I expect I will find more time to write more Blogs (unlike now when it is about to strike midnight at the end of 2020 and I am putting this blog together on my Mac in the kitchen )

So rather than go into too much detail about the how and what of Amazing Frog? I’ll just try and answer some of the questions that have come our way.

We really had to think of them as separate, the beta last year shared save data with V2 and it just caused too many headaches and issues. These were mainly development problems, but ultimately the biggest reason why they will remain separate is because the saved data historically has been one of the most difficult obstacles to over come when adding new content or more specifically new systems. The way the “skins” work in V2 is not how frog customisation works in the new version where we have items of physical clothing. Also by retaining and supporting legacy saved data from 6 years ago it can impact progressive gameplay in a way that is extremely restrictive to how we can develop new gameplay systems in the future. This is one of the main reasons why they are separate.

What will be the frequency of Updates?

They should be more frequent now. If you have played the xmas update this year then you will know that although the world is newer many Amazing Frog? “Usuals” are not present yes, there are only the VROG cars no sharks or alligators, no guns. Basically many of the features we need to redesign, rebuild etc. I would say though, just because there are no sharks today doesn’t mean they won’t be there very soon. So watch out! We really wanted to put something out at Xmas and many things we held back as they require just a bit more work or need more consideration on how we integrate them to gameplay. I will try and announce updates better this year as now we have this first version we can be more organised about it. Sometimes we may just put a small update out, but there will be big updates like flight school or the sewers which I will try and make a song and dance about and other which will be just about items and expansions.

Are you still going to update V2?

Most likely, yes. We had a bunch of stuff we started for V2 last year and I would like to finish it off.We even had some new costumes but had not completely decided on how you could unlock them, But from this point forward V2 (or Legacy) will not be as high priority as the new version.

Whats the news of other platforms?

I am sorry that I have not made the Mac version yet. I will make one tomorrow and see if it’s stable and upload it as soon as possible. After I do this blog hopefully I will be reacquainted with how the Steam Dev portal system works and find a way to post smaller announcements about updates. I haven’t had the time yet. Its been annoying how Legacy has not been working on the new OSX software, but Steam Mac version is high on my list. IOS and Android. We get a lot of requests for Android and I did have a version from Legacy back in April, but I could only get it to run in 32bit which made if inferior to the iOS version. I am pretty certain I can pull a mobile device version from what we are working on now, but I need more time as my focus right now is to flood the Steam version with more content and updates. Consoles and whatever – yeah one day but it’s a bit out of our reach at the moment as we are still actively developing.

Will There be multiplayer?

Yes Ok? Yes… but not before it’s ready and its taking me a me quite some time. We also have lots of other things to implement. It’s worth noting, that one of the main reasons for the complete code rewrite this past year was to facilitate Multiplayer at the core. I hate how long its taking me but there you go.

Where is the Day night cycle?

Honestly surprised no one found that.. was doubting we should put it in the game because the zombies were not ready yet.

Happy new year all.  Thanks for being a part of Amazing Frog?