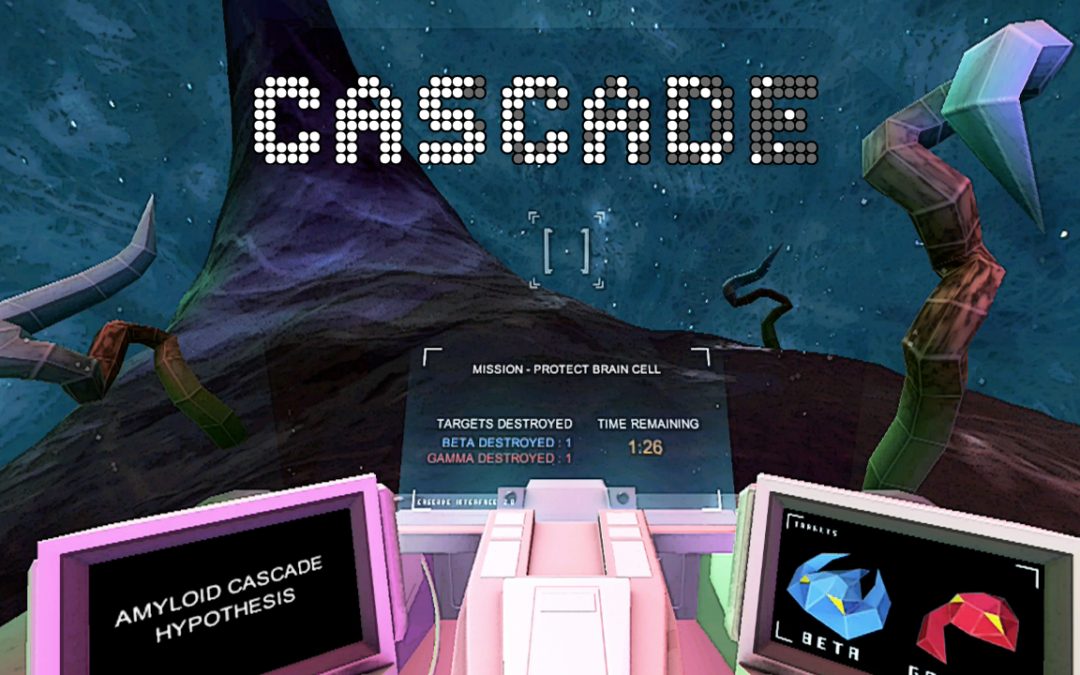 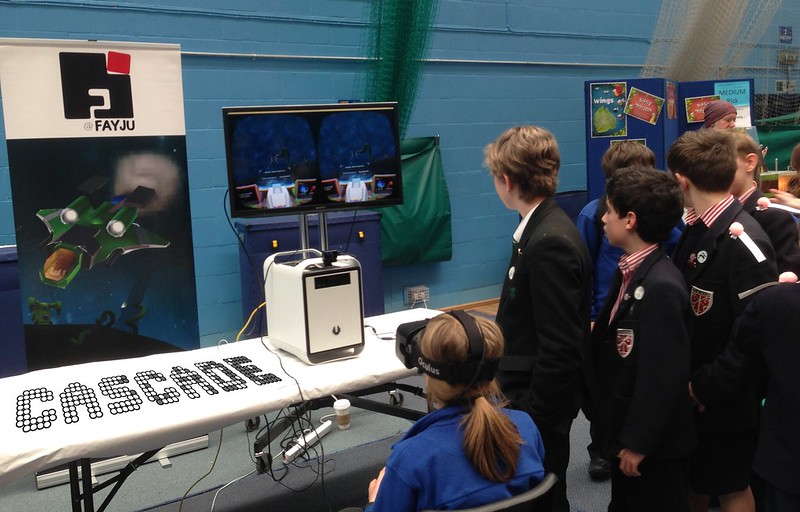 Cascade is our game about Alzheimer’s Disease. You fly around planet like brain cells amidst floating protein debris blasting enzymes in an attempt to save the brain, one cell at a time.

Its been a while since we said much about Cascade, but we have still been moving the project forward.  In March we showed the newest version of Cascade at the Big Bang Fair 2015 to thousands of kids and then took it the following week to the Bath Taps In2 Science events.
The current version features a single Brain Cell with a more detailed representation of the process The Amyloid Cascade Hypothesis. In this “simulation” you interact by piloting a space craft around the cell and blasting the enzymes whose unchecked actions are leading the the onslaught of Alzheimer’s Disease.
It works as a multiplayer experience all fighters co operating to save the same brain cell. 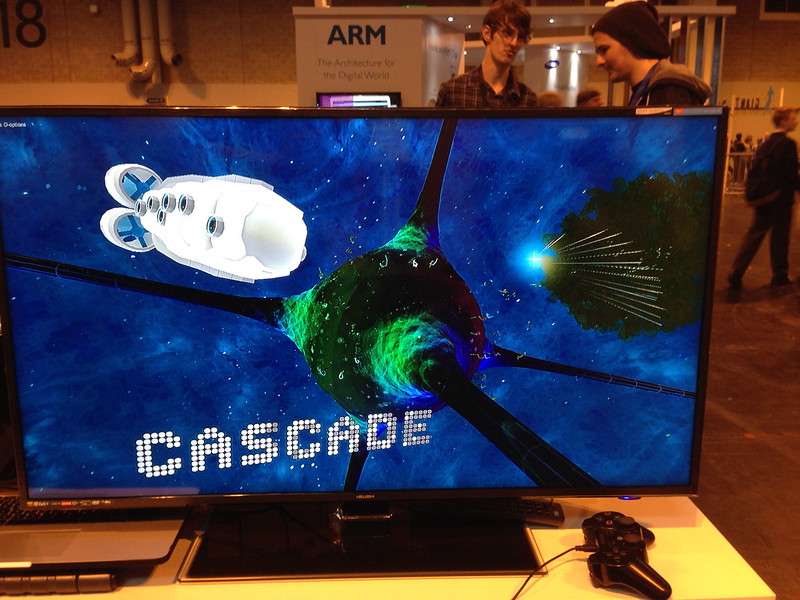 We started developing Cascade because I was so inspired by the work that Jody does. One of our main objectives was always to raise awareness Alzheimer’s Disease and the despirate need for further research.

As an artist, any biochemistry that Jody would describe to me would appear ripe with creative potential. Its inspiring. Through Cascade, I also hoped to shine a spotlight on biochemistry. It confuses me why so many game mechanics and ideas would be restricted to by becoming more conventional “War Simulations” . The great thing for games about this kind of molecular science is that it exposes an exciting realm of systems, processes and worlds perfect for inspiring games environments. And this, growing, “molecular world” is and every bit as rife with conflict as our own human scale world.

The Cascade game environment currently focuses on just one aspect of the pathology of Alzheimer’s Disease, The Amyloid Cascade Hypothesis. And over time we will integrate more aspects of the disease.  The longterm aim is for a players understanding of the pathology to grow through actually tackling the problem in gameplay.

To this point it has by no means been and easy process and we still have a long way to go.

Bath Taps in2 Science and The Big Bang Fair 2015

In essence, The Big Bang fair and Bath Taps in2 Science were very similar events. Its very exciting to be a part of them. Perhaps in its current state Cascade works best in these kinds of settings. Kids are ready to take in information when they arrive and excited to try something fun. At the events when Jody is on hand a fairly serious explanation of the project can be offered. Especially to concerned parents and teachers wondering why a computer game is at an education event.
Also in such an atmosphere I find I get quizzed more than usual and about game development which is always encouraging to see. 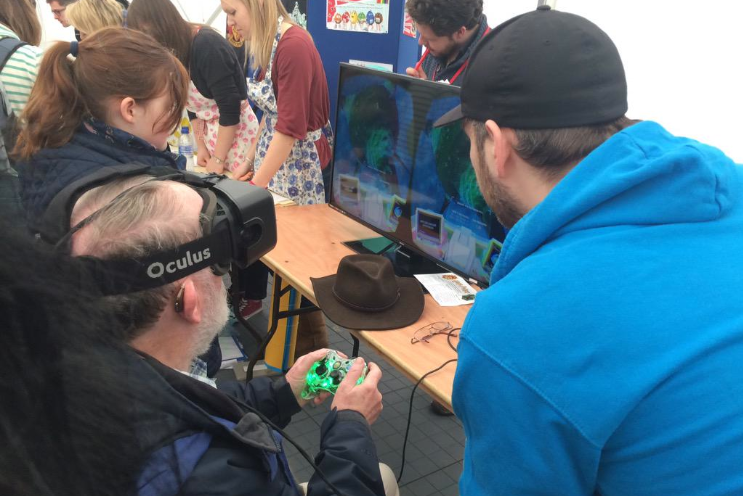 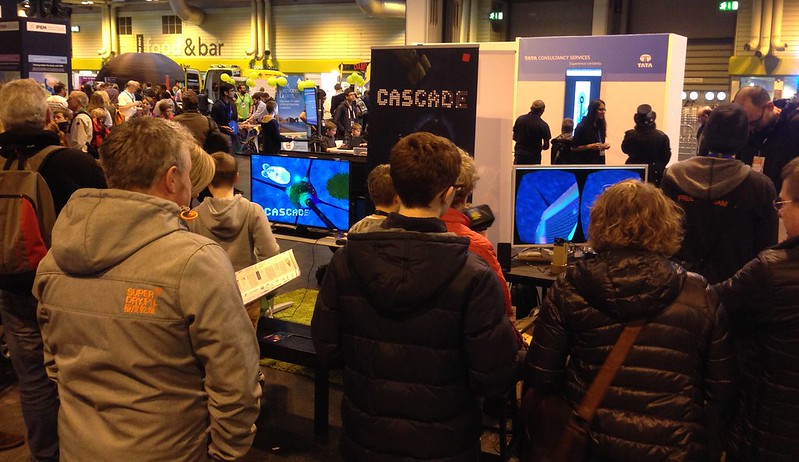 Kids love VR its official. The thing is about VR actually most people are moved by it once they have braved putting on the head set. One of the main attractions to Cascade when demoing is often the Oculus Headset. We always make sure there is a non VR version available. While VR certainly creates bigger queues and certainly more spectators both terminals VR and non VR were always active throughout both events. 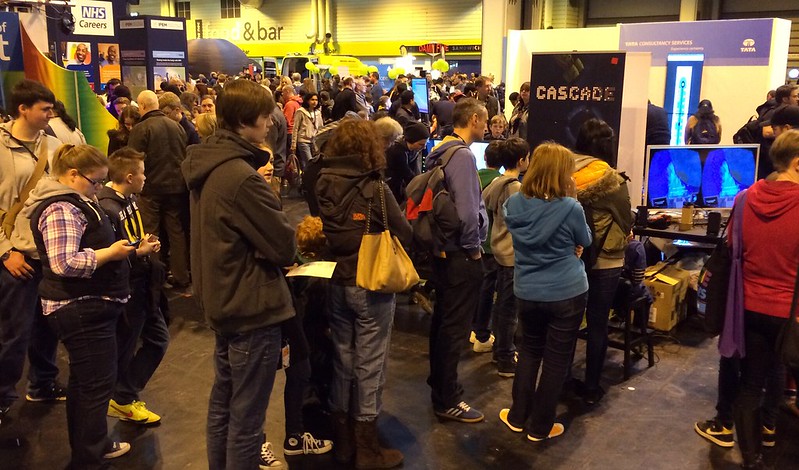 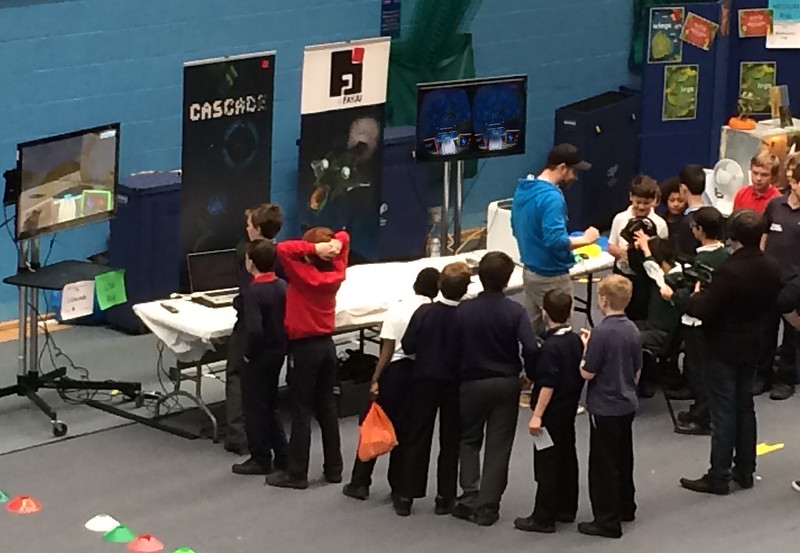 A quick note about  Cascade and Amazing Frog? If you know Fayju then you know that we are all about Amazing Frog? Over the past few years its safe to say that Amazing Frog? has taken over mine and Hal’s lives. We were struggling to find some balance so that we could continue development on Cascade, and then one day it hit me.
I fused the game projects.  This means that Cascade is now built out of the Amazing Frog? systems and is part of the project. The thinking behind this is so that it will not get left behind. It works both ways however. In integrating VR to the newer version of Cascade I had to basically make it so “The Frog” has Vr support. This resulted in a VR update to Amazing Frog?

As with Amazing Frog? Cascade is taking much longer than anticipated. This is mainly because what we started to make a few years back is not what we are making now. ideas and game evolve. The more we learned about the science, the more game ideas we had. This is how we make games, and we are really excited about what Cascade is turning into. 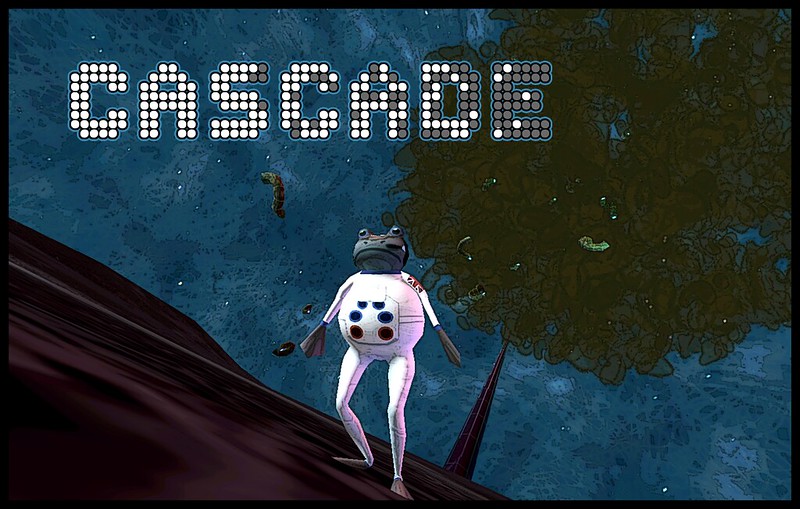