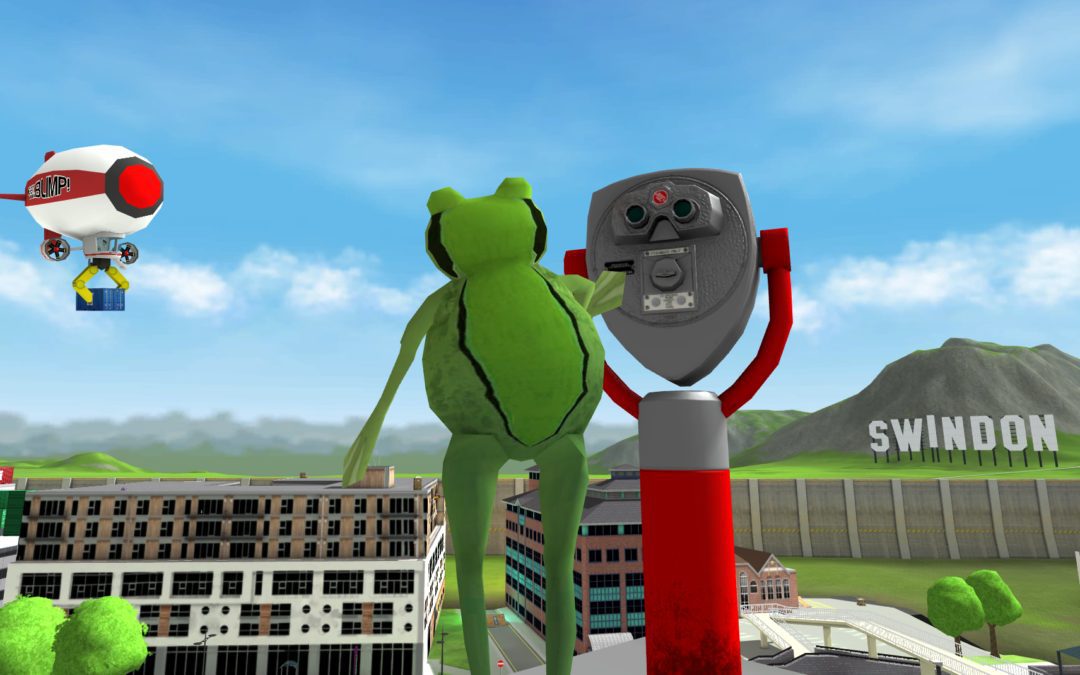 The next update (f0.2.5) has been a tough one. As I said to various Community members, at one point we were almost ready to go live with it. So I thought it best to write an announcement to explain what has been going on.
Many people had pointed out that Amazing Frog? wasn’t running so well on some of the less powered machines. Until recently we had expected to deal with most of the outstanding optimisation issues during the migration to Unity 5. the migration process is taking way too long and so we had to make a decision last month.
Plan A: – Release the new content for all and risk some of the less powered machines taking a big hit on performance.
or
Plan B: – Perform a series of much needed optimisations to make it run faster, but delay the next update as we would need to break quite a few key systems to progress. Eggs.. omelette etc.
We went with Plan B as we felt it would be better for All.
So for the past Month many optimisations have taken place. And I am happy to say they are now working really well and we are close to the next update, and just have to tidy a few remaining issues.

Culling – What we had for quality settings was in need of simplification and now with the new modifications many of the “quality options” are now redundant. We tried various configurations, but went for an object type culling system that can really help on all level of machine and basically just cleaned everything up to help the rendering run smoother.

Vehicles – Much of the demand on the CPU was actually in the physics and mainly from the cars. So they have been reprogrammed. This allows us to put loads more cars in scene at less CPU cost. We also had to look at this for other vehicles considering we put a load of Jet Skis in Swindon On Sea too and you can fly blimps now!
(After f0.2.5 its also puts us in a stronger position for NPC controlled vehicles.)
NPC – As it had been pointed out Swindon was looking kind of empty for frogs. This was because we made the NPCs/Zombies from the same mechanics as the avatar frogs were made from. This meant there was way too much “frogness” being calculated per NPC. This has been resolved and allows for more frogs to exist together…next we need to work more on their intelligence as… well currently they are a bit stupid.

So what’s going to be new in the next Update? 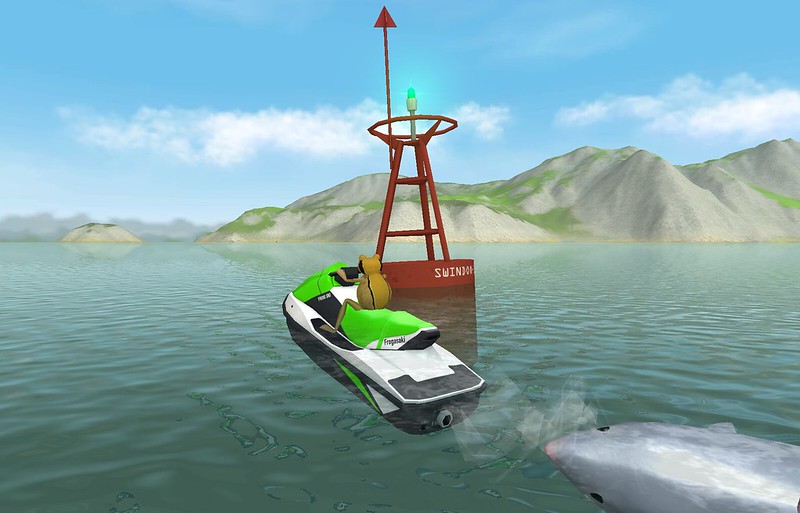 Well quite a bit…

Through the optimisation process we also reworked the frogs control system. Completely new Weapon feel with scopes and sights and all the weapons have been upgraded to work and look better. 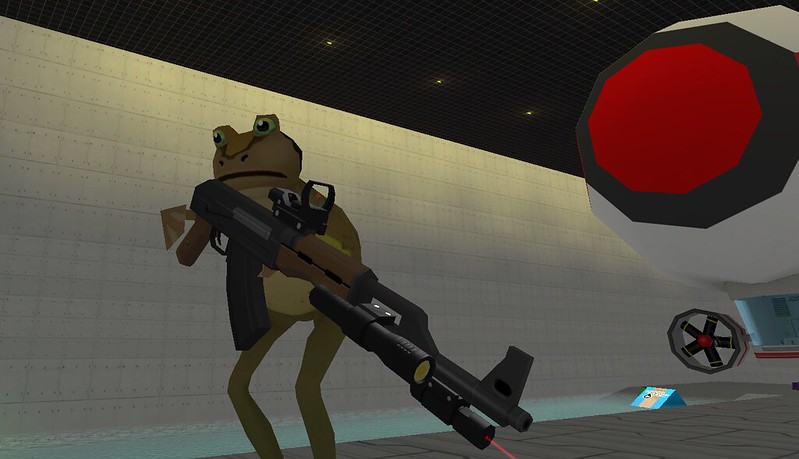 We’re bringing Jet Skis and faster boats. And while a shark may be able to pull you from one of the numerous Jet Skis you can take your revenge as the Sharks are no longer indestructible 🙂 also a Shark would now be just as content munching on a pig as they would you… oh and pigs and be killed too. 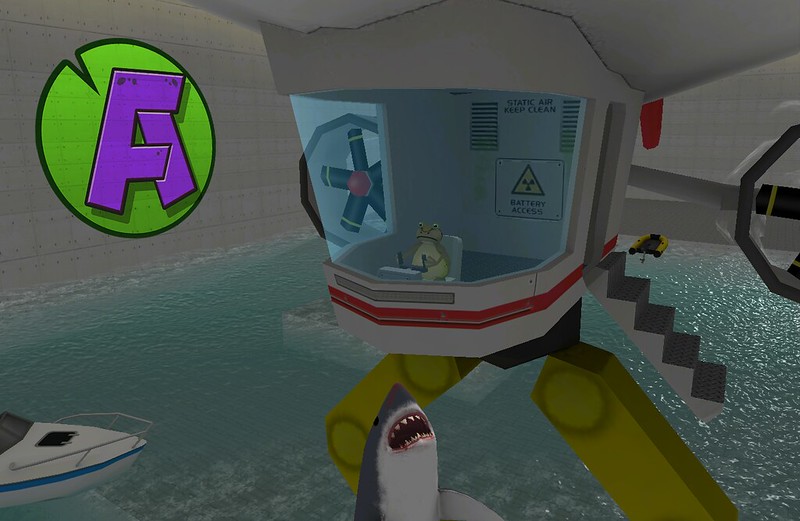 This is all peppered with a bunch of new things like balloons, telescopes and sea buoys, all in a new Swindon layout and naturally there is more hidden stuff too.
Including the flyable blimp to allow you to explore the landscape from great heights. Which has led us to start thinking about what the terminal velocity of a Frog might be. 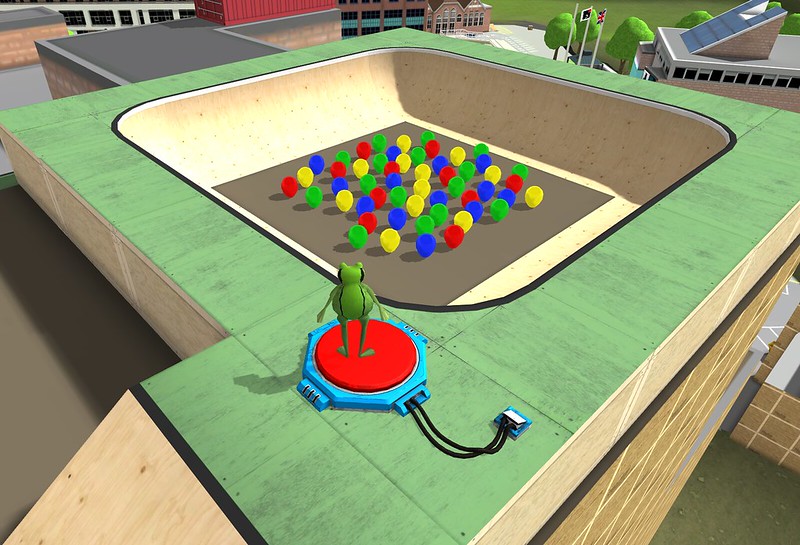 But there’s gonna be more, right?

Hell yeah!
One of the major things we have been working on is mission delivery and ammunition. After passing the optimisation hurdle of f0.2.5  we can get Amazing Frog? back on track with more frequent updates.
Its no secret that we are moving towards opening the Lab of the Swindon Space Program behind the LOL door to get to the Moon. From our point of view Amazing Frog? is not ready for space just yet and we want the mission flow for that journey to epic.
Before that can commence there are various systems that need to be put in place, such as the fPhone network.

Yes, we have build rocket launchers and water based weapons, but these are dependant on ammunition. Storage, accumulation and multiple types of customisation we be reliant on the fPhone interface.
So we can keep delivering content, we are introducing Switch activated micro missions and preparing for Versus and Party modes. Vs mode will likely be the first place you will be able to access our first online tests.

Players have been asking about Unity 5, so here’s our take on it.
We have had access to Unity 5 for some time and have been slowly moving the project towards Unity 5, behind the scenes. On the one hand it is really daunting that there are so many big changes for a project like Amazing Frog? but on the other hand its really exciting all the power at our disposal.
Early in the year, when we realised that the changes would be so vast, we decided that we would work on both Unity 5 and Unity 4 simultaneously. This was so we could keep moving forward, but actually deliver content. I can’t really estimate when the Unity 5 version will be ready at this stage, but what I can say is its going to look and feel Amazing ….Frog? 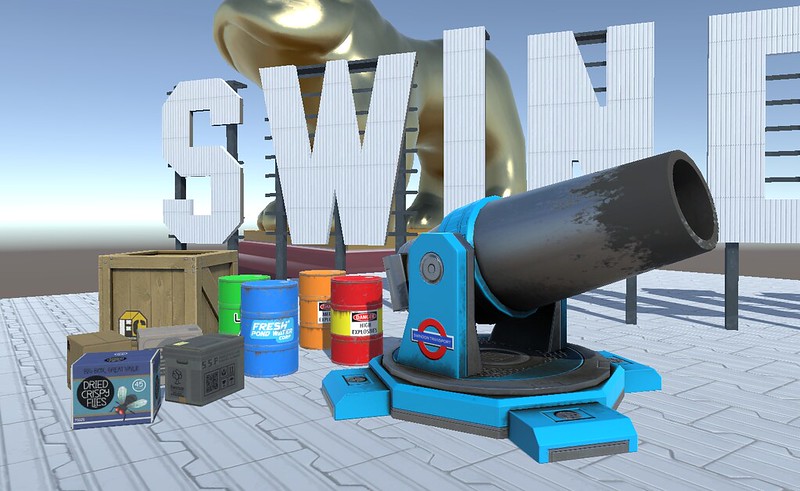 Thanks for waiting, and thanks for all the support. Its a great community and you guys really Get it.
New update coming soon.
Gaz n Hal,
Fayju
🙂