Whats your beef with bears, Goldilocks? 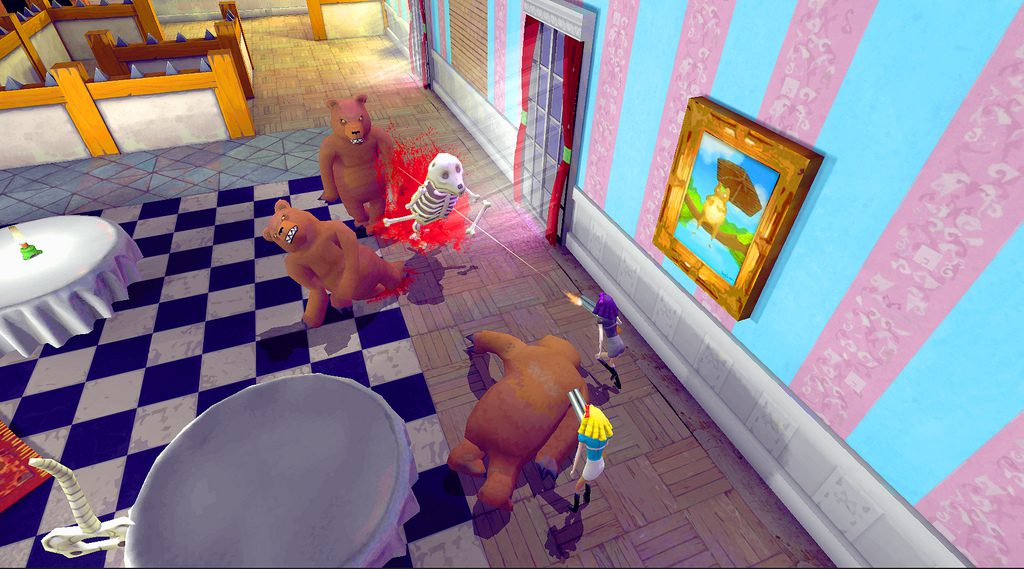 I think there is a potentially unhealthy obsession with “bear pain” in gaming these days. Bears are like the “other” zombies, or at least thats how I see it. Back in 2009 when Hal and I were putting together Fayju Ball and we were just getting into our Fayju Unity workflow and there was a lot of talk about bears. Hal made a test where a seriously large amount of bears were attacking some unfortunate, but strangely hot chick, who was guarding an outpost. Starship Troopers meets Resident Evil meets Bears and chicks.  Although, if there is any one person who has any reason to be pissed at bears then it would be Goldilocks. After all, she is simply a missunderstood little girl in need of a snack and some rest.  I have two young girls of my own and I know how scary they can be when tired and hungry, but I would not like to see them out in the woods, Hansel and Gretel style, surrounded by bears, unless they were armed to the teeth with some serious weaponry and had the skills to use it.

Goldilocks is back for breakfast.

Its no secret that fairy tails have fairly dark origins and over the years they become tamer. In my 40 year old ladybird version of the three little pigs, two of them totally get eaten and and then in a vengeful and vindictive manner, the third pig not only plays on the wolf’s sanity, but then boils him alive its quite a sinister end. Effectively, the pig gets nasty in response to the threat presented by the non negotiable predator. I guess that explains the old playground convention from my childhood  “Some one hits you? hit em back harder!”  There is a strong sense of “sinister” in the illustrations of The Three Little Pigs (mixed with some potentially misguided cultural representations…). Nonetheless they are very powerful images that resonate in my mind. The splash in the pot is very awesome, I remember trying to recreate it on many occasions.

So I can only imagine what other kinds of fates fell on the original Goldilocks characters to teach the children a harsh lesson back at the beginning of the 20th century.The Goldilocks story evolution was pretty straightforward. Silver haired, trespassing, old lady becomes silver fox, silver haired little girl – “Silver Locks”, “Golden Locks” becomes Goldilocks.  The three anthropomorphic bears remaining almost certainly as victims, even in present day when threatened by a little girl. The change from dangerous, vagrant, spiteful old lady to innocent little girl as the protagonist could be seen as a comment there on how our attitudes to educating our children has changed over the years. Fear vs empowerment, which being better, who knows…?  What I do know is that its slightly delusional to believe a little girl can scare the crap out of a family of bloodthirsty bears, unless of course she is packing a shotgun and is ready for some serious ass kicking.

So Goldilocks and the 3000 bears had been floating around our minds for about 3 years, we had toyed with scenarios, is it a hide and seek game is Goldilocks massively under threat? are the bears cuddly or crazy. In january we got our development OUYA and it all kicked off. Our intention was to go all out on Amazing Frog our game which is based in a replica of our own town, but then the Kill Screens Daily Create Game Jam kicked off. We had to enter and the rules forbid us from working on Amazing Frog. It was the perfect time for a 10 day intense “bring Goldilocks and the 3000 bears to life” And so we did. And now along with Amazing Frog and Cascade, we have 3 Games in production for OUYA….. Thanks OUYA ….. We knew that we could not build the kind of game we wanted to build in 10 days, but we knew the pressure would force us to have something tangible at the end of it. And it did. Everything we build for Goldilocks to do with Rag dolls and mechanim in Unity went straight into Amazing Frog.

Goldilocks is in production and will be out later in the year.